steps equals the number of ways to get to

steps plus the number of ways to get to 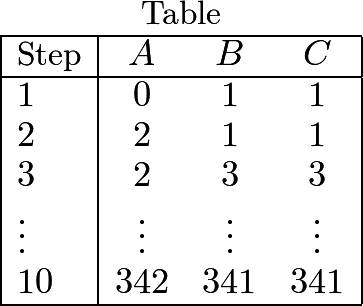 Notice the pattern that there are

way to get to

moves. Thus, there are

Notice that this problem can be converted into a Markov Chain transition matrix.

Solution 4.1 (solution 4 but rigorized and generalized)

As a note, do NOT do this on the exam as it will eat up your time, but feel free to experiment around with this if you have a good enough understanding of linear algebra. This writeup will be extremely lengthy because I am assuming just very basic concepts of linear algebra. The concepts here extend to higher levels of mathematics, so feel free to explore more in depth so that you can end up solving almost any variation of this classic problem.

There are a possible of 3 states for this problem, so we can model the problem as a stochastic process. The resulting process has a transition matrix of:

We aim to diagonalize this transition matrix to make it easier to exponentiate by converting it into what's known as it's Jordan Canonical Form.

In order to do this, we must extract the eigenvalues and eigenvectors of the matrix. The eigenpolynomial for this matrix is obtained by calculating this matrix's determinant with

We have the matrix's eigenpolynomial to be

, and extracting eigenvalues by setting the polynomial equal to

of multiplicity 2. To extract the eigenvectors, we must assess the kernel of this matrix (also known as the null space), or the linear subspace of the domain of

where everything gets mapped to the null vector.

We first do this for

across the diagonals to get

, we first reduce it to reduced row echelon form, which is

. From here, we compute the kernel by setting

. So if we take our free variable

, then that means that in the same fashion,

, so hence, the kernel of

is the eigenvector corresponding to

. We do the same computations for our second unique eigenvalue, but I will save the computation to you. There are actually 2 eigenvectors for

, because the reduced row echelon form for

has 2 free variables instead of 1, so our eigenvectors for

. We are now ready to begin finding the Jordan canonical form

In linear algebra, the JCF (which also goes by the name of Jordan Normal Form) is an upper triangular matrix representing a linear transformation over a finite-dimensional complex vector space. Any square matrix that has a Jordan Canonical Form has its field of coefficients extended into a field containing all it's eigenvalues. You can find more information about them on google, as well as exactly how to find them but for now let's get on with the problem. I will skip the computation in this step, largley because this writeup is already gargantuan for a simple AIME problem, and because there are countless resources explaining how to do so.

We aim to decompose

is a matrix whose columns consist of the eigenvectors of

is the Jordan matrix, and

is, well, the inverse of

Now that we have converted to Jordan Canonical Form, it is extremely easy to compute

4.1.4: Using the JCF to calculate the transition matrix to the power of any n, large or small

It is an important fact that for any matrix

Using this fact, we aim to find the general solution for the problem.

, and using the laws of matrix multiplication,

So finally, our final, generalized transition matrix after any number of steps

4.1.5 just plugging in for this problem lol

For the sake of this problem, we seek the top left element, which is

moves as a byproduct!

. We can either round up or down. If we round down, we see

cannot be reduced any further and because the only answers on the AIME are below 1000, this cannot be the right answer. However, if we round up,

can be reduced to

is an accepted answer.

The generating function for this is

degrees to a side and simplifying

Since we take this rotation

which is the same as

. This completely simplified is

and since your maximum power is

, we only have to find the coefficients for

would apply here but the

is the lowest power there is).

, and the same goes for

and the final sum for the numerator is

. The total sum is

and for the denominator, it was simply

and this simplified was

. Therefore the sum is

Start of with any vertex, say

the number of paths ending where it started. Then notice that for a path to end in the vertex you started on, you must have for the

case that of the

total paths, we must take away the paths that end in the

-st term where it started off. (Because imagine on the

move that it landed on vertex

. Then if we wanted to find the number of length

paths that end at

, we would be able to find that path, because on the

-st move it landed at

). Hence we have the recursion

, so that the probability is

(Note: One might be confused because you might think maybe "But we only did it for case

. Oh wait they are symmetric. So then if this is the correct answer, why am I wrong, or what happened to that factor of

?" Well truth be told, I skipped a somewhat major step. Notice that the total amount

only comes from if we START OFF at vertex

. So we really need to multiply

as the TRUE total amount. However this factor of

doesn't matter because now that we do case work, let

once again denote the number of paths starting at vertex

. Then abusing symmetry, we have that the number of paths ending where it started as

. So now when we take the probability, we cancel the factor of

, and obtain the same answer as if it were for all three vertices).