A long thin strip of paper is

unit in width, and is divided into

strip of double thickness. Next, the right end of this strip is folded over to coincide with and lie on top of the left end, resulting in a

strip of quadruple thickness. This process is repeated

more times. After the last fold, the strip has become a stack of

unit squares. How many of these squares lie below the square that was originally the

nd square counting from the left?

, but we will consider more generally to find an inductive solution. Call

the number of squares below the

square after the final fold in a strip of length

Now, consider the strip of length

. The problem asks for

. We can derive some useful recurrences for

as follows: Consider the first fold. Each square

is now paired with the square

. Now, imagine that we relabel these pairs with the indices

value of the pairs correspond with the

(if the member of the pair that you're looking for is the top one at the final step).

So, after the first fold on the strip of length

square is on top of the

square. We can then write

(We add one because

is the odd member of the pair, and it will be on top. This is more easily visually demonstrated than proven.) We can repeat this recurrence, adding one every time we pair an odd to an even (but ignoring the pairing if our current square is the smaller of the two):

We can easily calculate

from a diagram. Plugging back in,

First its in position

spaces over it. We flip once, since

is to the right it gets flipped onto itself, going from position

Flip again, it's still in position 83 but now, since it didn't move position, we add the thickness of the fold we just flipped, which is 2. So now there are

Flip again, its to the left of the fold again, so we add

Flip again, it goes from

in position, and there was

square below our number before we flipped, so now that one number is above it.

, and now there were

squares below it so now they are above it.

Flip again, it stays in position, so we add

Since the question asks for how many squares were below our number, our answer is

We can keep track of the position of the square labeled 942 in each step. We use an

coordinate system, so originally the 942 square is in the position

. In general, suppose that we've folded the strip into an array

squares tall (so we've made

folds). Then if a square occupies the location

, we find that after the next fold, it will be in the location described by the procedure

Therefore, we can keep track of the square's location in the following table. 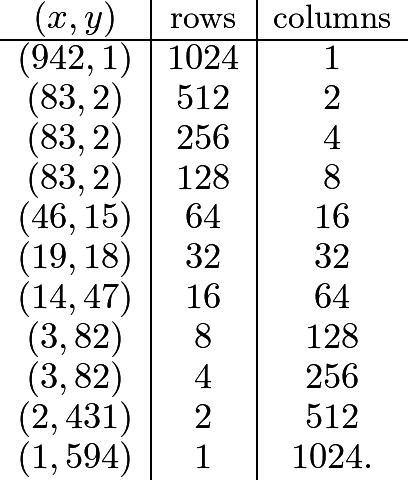 Therefore, at the end of the process, the square labeled 942 will be in the position