consecutive integers whose sum is

consecutive integers whose sum is

The absolute value of the difference between the greatest element of

Note that since set

consecutive integers that sum to

, the middle integer (i.e., the median) must be

. Therefore, the largest element in

Further, we see that the median of set

, which means that the "middle two" integers of set

. Therefore, the largest element in

, which is clearly not possible, thus 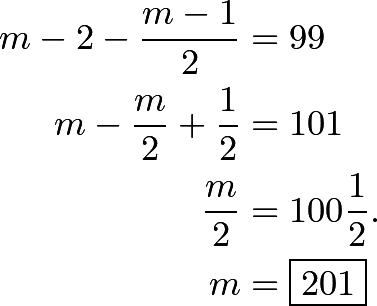 Let us give the elements of our sets names:

. So we are given that

so plugging this into

Then by the given,

is a positive integer so we must have

The thing about this problem is, you have some "choices" that you can make freely when you get to a certain point, and these choices won't affect the accuracy of the solution, but will make things a lot easier for us.

First, we note that for set

. This comes from the sum of an arithmetic sequence.

, we find the sum of the two terms is

Doing the same for set B, and setting up the equation with

Now we know, assume that both sequences are increasing sequences, for the sake of simplicity. Based on the fact that set

has half the number of elements as set

, and the difference between the greatest terms of the two two sequences is

(forget about absolute value, it's insignificant here since we can just assume both sets end with positive last terms), you can set up an equation where

is the last term of set A:

Note how i basically just counted the number of terms in each sequence here. It's made a lot simpler because we just assumed that the first term is negative and last is positive for each set, it has absolutely no effect on the end result! This is a great strategy that can help significantly simplify problems. Also note how exactly i used the fact that the first and last terms of each sequence sum to

to see what i mean).

Solving this equation we find

. We know the first and last terms have to sum to

so we find the first term of the sequence is

. Now, the solution is in clear sight, we just find the number of integers between

, inclusive, and it is

Note how this method is not very algebra heavy. It seems like a lot by the amount of text but really the first two steps are quite simple.

First, calculate the average of set

. It's obvious that they are

respectively. Let's look at both sets. Obviously, there is an odd number of integers in the set with

being in the middle, which means that

are equal. In set

, it is clear that it contains an even number of integers, but since the number in the middle is

, we know that the range of the consecutive numbers on both sides will be

. We see that there are

on both sides of

. After plugging this into set

, we find that the set equals

. From there, we find the absolute value of the difference of both of the greatest values, and get 0.

. We see that the resulting set of numbers is

. We then plug this into set

, and find that the set of numbers is

which indeed results in the average being

. We then find the difference of the greatest values to be 26.

From here, we see a pattern that can be proven by more trial and error. When we make

, then the difference is

whearas when we make it

, then the difference is

from when it was

. We then add this to our initial