What is the sum of all possible x coordinates of 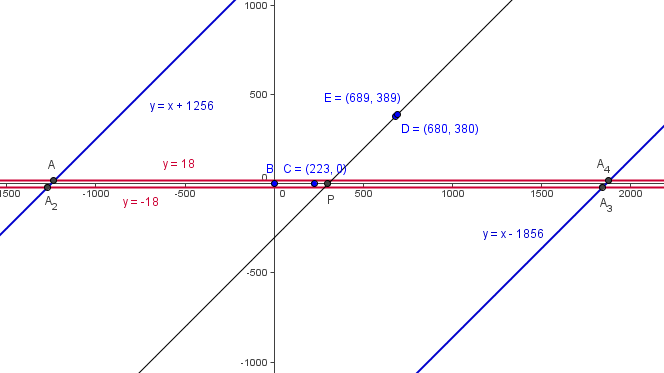 , we have that the height of

lies on the lines

, so the equation of the line is

lies on one of two parallel lines that are

. Now take an arbitrary point on the line

and draw the perpendicular to one of the parallel lines; then draw a line straight down from the same arbitrary point. These form a 45-45-90

, so the straight line down has a length of

. Now we note that the y-intercept of the parallel lines is either

units above or below the y-intercept of line

; hence the equation of the parallel lines is

We just need to find the intersections of these two lines and sum up the values of the x-coordinates. Substituting the

, which can easily be calculated to be

. Now the sum of the x-coordinates is just

After we compute that the y-value can be either

), we can use an easy application of the Shoelace Theorem to figure out the values of X. Since we already know the two distances (positive y and negative y) will be the same, then we can simply plug in y=18, compute the sum of the two corresponding x-values and multiply it by two to get our answer which is