edges. The polyhedron is cut by planes

in such a way that plane

cuts only those edges that meet at vertex

. In addition, no two planes intersect inside or on

pyramids and a new polyhedron

. How many edges does

is cut by two planes, so

meet at each vertex, so

. A middle portion of each original edge is also present in

, where F is the number of faces of

is cut by two planes, so

vertices. Each cut by a plane

creates an additional face on

, so Euler's Polyhedron Formula applied to

is the number of edges of

. Subtracting the first equation from the second gives

Each edge connects two points. The plane cuts that edge so it splits into

at each end (like two legs) for a total of

But because each new edge is shared by an adjacent original edge cut similarly, the additional edges are overcounted 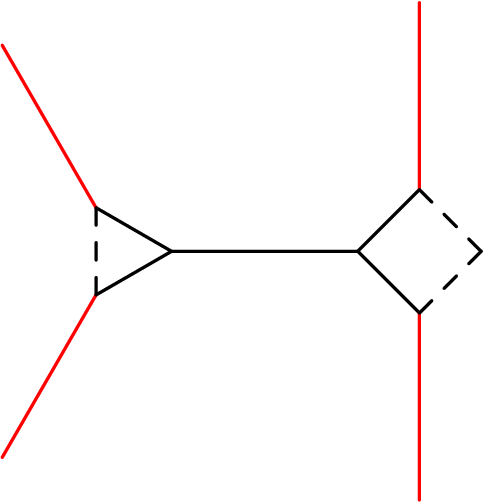 edges to start with,

new edges result. So there are

edges in the figure.

The question specifies the slices create as many pyramids as there are vertices, implying each vertex owns 4 edge ends. There are twice as many edge-ends as there are edges, and

The base of a pyramid has 4 edges, so each sliced vertex would add four edges to

I doubt anyone has the mental capacity to imagine

in its full complexity in their mind. So, we begin by examining a simpler structure: a cube.

denote the number of edges of a polyhedron

denote the number of vertices of

denote the number of edges that meet at each vertex.

is a cube. Then

Why? Well, imagine an ant walking along an edge of a cube. When it reaches the end of the edge, it will be standing on a vertex (by definition). But, what if it had walked the other way? Well, it would still be on the same edge, but it would reach the other endpoint of the edge, another vertex. Therefore, we can say that a polyhedron with

total endpoints. In the case of

, a cube, this means a cube has

total endpoints. But a cube only has

... This doesn't make any sense... Wait a minute, we're dealing with a polyhedron, which means multiple edges will be connected to the same vertex. In the case of a cube,

edges meet at every vertex. So we have

vertices. The math works out. Let's apply this to

We are told that

isn't given explicitly. So we'll let

What does this mean, exactly? Well

edges, so it must has

endpoints (endpoints, not vertices). So if we can figure out either

, the number of vertices, or

, the number of edges per vertex, we can figure out the other variable. Hmmmm... The problem doesn't give us any clues about either. How frustrating. Let's leave this alone and consider the other information given to us.

We are also told that "the polyhedron is cut by planes

" (at this point I imagine

is a giant block of cheese, potato, etc.), and also that "plane

cuts only those edges that meet at

Well, let's go back to our cube. Notice that there are exactly as many planes as vertices. Think of the planes as knives (or knife strokes) cutting into a big cube of cheese. We're cutting the cheese

times, since there are

vertices. Also, whenever we cut into the cheese, we have to direct the cuts near a vertex, cutting into only the edges connected to that vertex. How do we do that? Well, since we can't cut into any other edges, we're gonna have to settle for cutting corners (see what I did there? ...Ok, I admit it was cheesy... see what I did there, too?😂). We have to shave off just the corners of the cheese block, because this way it won't interfere with any of the other edges.

The problem also tells us that none of the planes overlap. In our cheese analogy, this means that every time we cut, we have to make sure the cuts are always into new cheese, and not into previously cut areas (all of the cuts are distinct, and don't overlap). Sure enough, this is in agreement with the information that exactly

pyramids are cut off. Let's go back to

cuts. The question we want to answer is: "After all of the cuts are made, how many total edges will

(the figure that remains), have?". Well, we're gonna have to figure out either

pyramids were made, but it doesn't specify exactly how many sides the pyramid has. So... that implies that it doesn't matter, or else the problem wouldn't be solvable. Let's suppose

edges meet at every vertex). Then we would have

vertices, and we would make

cuts. But how many more edges does it yield? (We are told that the planes don't overlap, so the original edges are all present.) Well, if we cut off the corner of a cube, it will create

more edges... which is coincident with the fact that

new edges. Rewriting the equation to find the number of vertices, we have

But we just said that for every vertex/cut, we gain

more edges. So the total number of new edges is

. It doesn't matter how many vertices

has, or how many edges meet at every vertex. Given the conditions in the problem, we will always gain

more edges, regardless of the values of