, respectively. Assume that the area of pentagon

is the maximum possible. What is

By the Inscribed Angle Theorem,

be the feet of the altitudes of

, and as exterior angle

, respectively, it follows that

are all on a circle. 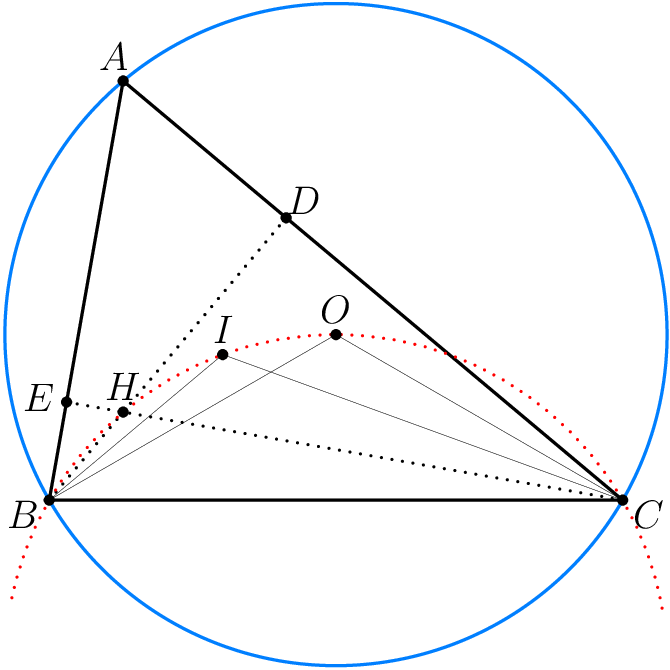 , it is sufficient to maximize the area of quadrilateral

are two points in an arc of circle

, then the maximum area of

located halfway in the arc of the circle

with larger area than

remains the same. Similarly, if

Therefore the maximum is achieved when

(verifiable by angle chasing). Then, as

is cyclic. Observe that

is fixed, hence the circumcircle of cyclic pentagon

is also fixed. Similarly, as

(both are radii), it follows that

is maximal, it suffices to maximize

by angle chasing; it follows that

(isosceles base angles are equal), hence

There are two ways to proceed.

be the circumcenter and circumradius, respectively, of cyclic pentagon

, the most straightforward is to write

and, using the fact that

A more elegant way is shown below.

is maximized only if

be the midpoint of minor arc

the midpoint of minor arc

since the altitude from

is greater than that from

to be the new orthocenter, incenter, respectively, this contradicts the maximality of

, so our claim follows.

from above, along with the fact that inscribed angles that intersect the same length chords are equal,