are written in a

array of squares, one number in each square, in such a way that if two numbers are consecutive then they occupy squares that share an edge. The numbers in the four corners add up to

. What is the number in the center?

Consecutive numbers share an edge. That means that it is possible to walk from

by single steps north, south, east, or west. Consequently, the squares in the diagram with different shades have different parity: 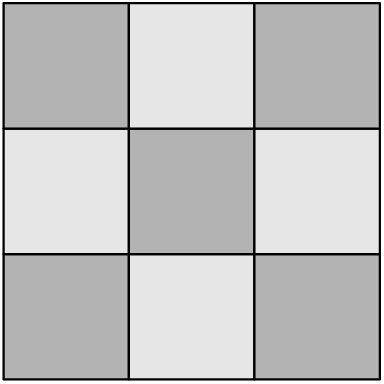 But since there are only four even numbers in the set, the five darker squares must contain the odd numbers, which sum to

Therefore if the sum of the numbers in the corners is

, the number in the center must be

is a valid solution.

, and the numbers follow the given condition. The center number is found to be

First let the numbers be

around the outsides and

in the middle. We see that the sum of the four corner numbers is

, then the corner numbers will add up to

and the consecutive numbers will still be touching each other. The answer is

Testing out the box with the center square taking on the value of 5 and 6, we find that they either do not satisfy the first or the second condition. Testing 7, we find that a valid configuration is