During AIME testing, the AoPS Wiki is in read-only mode. No edits can be made.
AoPS Wiki
Resources Aops Wiki 2020 AMC 12B Problems/Problem 5

are playing in a basketball league where each game results in a win for one team and a loss for the other team. Team

of its games and team

of its games. Also, team

How many games has team

games in total so that it has won

games. It follows that team

games in total so that it has won

We set up and solve an equation for team 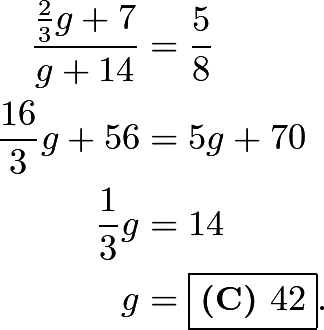 denotes number of games lost, and

. Using the given information, we can set up the following two equations:

We can solve through substitution, as the second equation can be written as

, and plugging this into the first equation gives

. Finally, we want the total number of games team

has played, which is

Using the information from the problem, we can note that team

of their matches. Using the answer choices, we can construct the following list of possible win-lose scenarios for

represented in the form

We can then test each of the five

fits this description. Then working backwards and subtracting

gives us the point

games in total (7 wins, 7 losses) Since the ratio of

Similarly, since the ratio of

Now, we can go through the answer choices and see which ones work:

So we can see

is the only valid answer.