Let's try out for small values of

to get a feel for the problem. When

. The problem states that for

Let's perform casework on the number of elements in

In this case, the only possible equivalencies will be if they are the exact same element, which happens

In this case, if they share both elements, which happens

times, we will get

for each time, and if they share only one element, which also happens

times, we will get

for each time, for a total of

In this case, the only possible scenario is that they both are the set

Now notice, the number of intersections by each element

to the answer. Notice that

(note that you can assume this and answer the problem if you're running short on time in the real test).

- to find a general solution, we must count the number of these subsets that

to be in both

, we need both sets to contain

and another subset of

that is the size of both

, the number of ways to choose the subsets

for both subsets, so the total number of ways to choose the subsets are

. Now we sum this over all possible

's to find the total number of ways to form sets

. This is equal to

. This is a simplification of Vandermonde's identity, which states that

, so this sum is equal to

. Finally, since we are iterating over all

We now plug in

to the expression we want to find. This turns out to be

After cancellation, we have

don't have any common factors with

, so we're done with the simplification. We want to find

We take cases based on the number of values in each of the subsets in the pair. Suppose we have

elements in each of the subsets in a pair (for a total of n elements in the set). The expected number of elements in any random pair will be

by linearity of expectation because for each of the

elements, there is a

probability that the element will be chosen. To find the sum over all such values, we multiply this quantity by

Notice that we can rewrite this as

We can simplify this using Vandermonde's identity to get

Evaluating the numerators and denominators mod 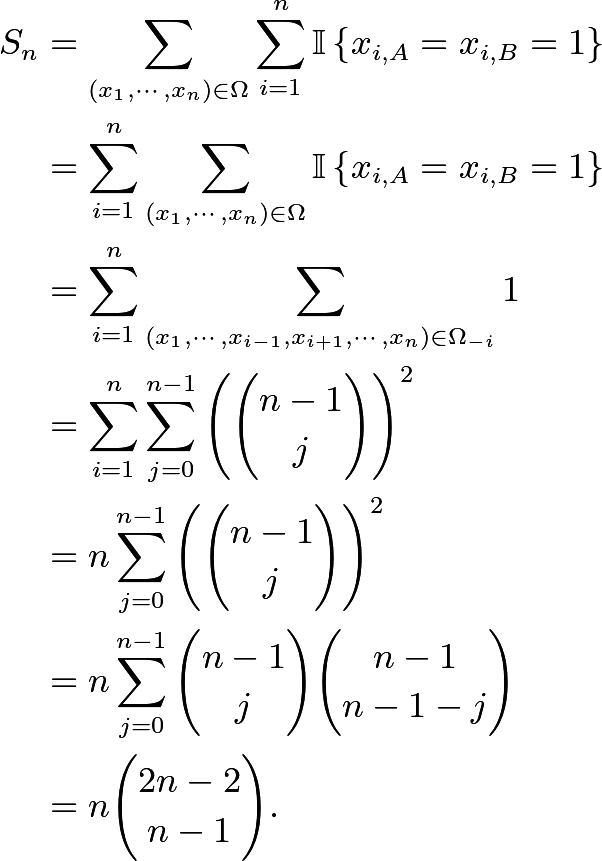 This is in the lowest term. Therefore, modulo 1000,