Inequalities are arguably a branch of elementary algebra, and relate slightly to number theory. They deal with relations of variables denoted by four signs:

Note that if and only if

, and vice versa. The same applies to the latter two signs: if and only if

Some properties of inequalities are:

In general, when solving inequalities, same quantities can be added or subtracted without changing the inequality sign, much like equations. However, when multiplying, dividing, or square rooting, we have to watch the sign. In particular, notice that although

. In particular, when multiplying or dividing by negative quantities, we have to flip the sign. Complications can arise when the value multiplied can have varying signs depending on the variable.

We also have to be careful about the boundaries of the solutions. In the example

Solutions can be written in interval notation. Closed bounds use square brackets, while open bounds (and bounds at infinity) use parentheses. For instance,

Linear inequalities can be solved much like linear equations to get implicit restrictions upon a variable. However, when multiplying/dividing both sides by negative numbers, we have to flip the sign.

A more complex example is

Here is a common mistake: 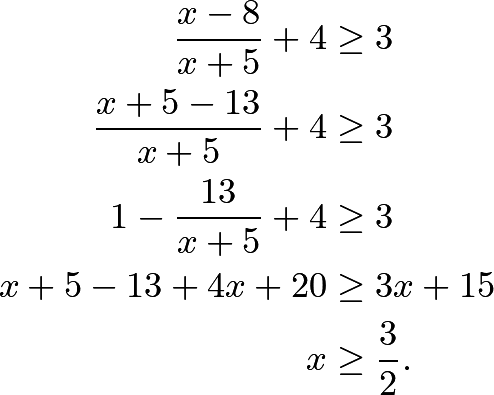 The problem here is that we multiplied by

as one of the last steps. We also kept the inequality sign in the same direction. However, we don't know if the quantity

is negative or not; we can't assume that it is positive for all real

. Thus, we may have to reverse the direction of the inequality sign if we are multiplying by a negative number. But, we don't know if the quantity is negative either.

A correct solution would be to move everything to the left side of the inequality, and form a common denominator. Then, it will be simple to find the solutions to the inequality by considering the sign (negativeness or positiveness) of the fraction as

We will start with an intuitive solution, and then a rule can be built for solving general fractional inequalities. To make things easier, we test positive integers.

makes a good starting point, but does not solve the inequality. Nor does

. Therefore, these two aren't solutions. Then we begin to test numbers such as

, and so on. All of these work. In fact, it's not difficult to see that the fraction will remain positive as

gets larger and larger. But just where does

, which causes a negative fraction at

, begin to cause a positive fraction? We can't just assume that

is the switching point; this solution is not simply limited to integers. The numerator and denominator are big hints. Specifically, we examine that when

(the numerator), then the fraction is

, and begins to be positive for all higher values of

. Solving the equation reveals that

is the turning point. After more of this type of work, we realize that

brings about division by

, so it certainly isn't a solution. However, it also tells us that any value of

that is less than

brings about a fraction that has a negative numerator and denominator, resulting in a positive fraction and thus satisfying the inequality. No value between

itself) seems to be a solution. Therefore, we conclude that the solutions are the intervals

For the sake of better notation, define the "x-intercept" of a fractional inequality to be those values of

that cause the numerator and/or the denominator to be

.To develop a method for quicker solutions of fractional inequalities, we can simply consider the "x-intercepts" of the numerator and denominator. We graph them on the number line. Then, in every region of the number line, we test one point to see if the whole region is part of the solution. For example, in the example problem above, we see that we only had to test one value such as

, as well as one value in the region

One must be careful about the boundaries of the solutions. In the example problem, the value

was a solution only because the inequality was nonstrict. Also, the value

was not a solution because it would bring about division by

A inequality that is true for all real numbers or for all positive numbers (or even for all complex numbers) is sometimes called a complete inequality. An example for real numbers is the so-called Trivial Inequality, which states that for any real

. Most inequalities of this type are only for positive numbers, and this type of inequality often has extremely clever problems and applications.