Trigonometry is the study of relations between the side lengths and angles of triangles through the trigonometric functions. It is a fundamental branch of mathematics, and its discovery paved the way towards countless famous results.

Outside of competition math, trigonometry is the backbone of much of analysis. In particular, Fourier Analysis is written almost entirely in the language of the trigonometric functions.

The right triangle definition is most commonly taught in introductory geometry classes for its simplicity. However, it has its limitations. It only works if

Even though it is defined using right triangles, trigonometry is just as useful when used on acute and obtuse triangles. The Law of Sines and Law of Cosines mentioned below generalize the right triangle definition to include all triangles. 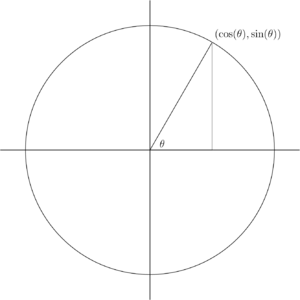 These definitions are not used in high school math competitions; however, they do appear on the Putnam and other university competitions.

While trigonometry is useful at any level, intermediate competitions are particularly fond of geometric trigonometry questions. In addition to those mentioned

The Law of Sines states that in any

The Law of Cosines states that in any

. It is a generalization of the Pythagorean Theorem and is used to prove several famous results, such as Heron's Formula and Stewart's Theorem. However, it sees limited applicability compared to the Law of Sines, as usage of the Law of Cosines can get algebra-heavy. It is helpful to memorize common, "nicer" values of sine and cosine as it can come in handy in contests, especially if you wish to apply either this or the Law of Sines to problems.

Trigonometric identities are expressions true for all inputs involving the trigonometric functions. Due to the natural relationship between their definitions, these identities run numerous. In contest math, the most useful of these are: