During AMC testing, the AoPS Wiki is in read-only mode. No edits can be made.
AoPS Wiki
Resources Aops Wiki Difference between revisions of "2009 AIME II Problems/Problem 8"

There are many almost equivalent approaches that lead to summing a geometric series. For example, we can compute the probability of the opposite event. Let

be the probability that Dave will make at least two more throws than Linda. Obviously,

is then also the probability that Linda will make at least two more throws than Dave, and our answer will therefore be

Suppose that Linda made exactly

throws. The probability that this happens is

, as she must make

unsuccessful throws followed by a successful one. In this case, we need Dave to make at least

throws. This happens iff his first

throws are unsuccessful, hence the probability is

Thus for a fixed

the probability that Linda makes

throws and Dave at least

Then, as the events for different

is simply the sum of these probabilities over all 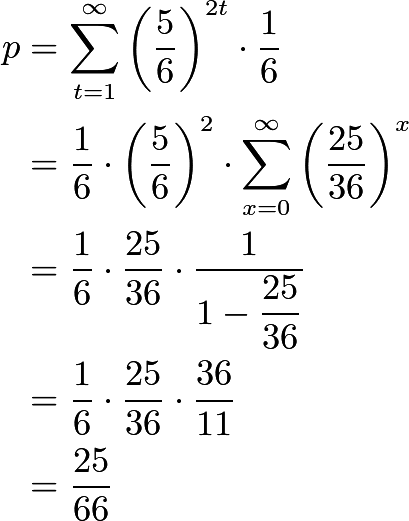 Hence the probability we were supposed to compute is

, both throw a six and we win.

exactly one of them throws a six. In this case, we win if the remaining player throws a six in their next throw, which happens with probability

none of them throws a six. Now comes the crucial observation: At this moment, we are in exactly the same situation as in the beginning. Hence in this case we will win with probability

, hence the answer is