Before starting to paint, Bill had

ounces of red paint, and

ounces of white paint. Bill painted four equally sized stripes on a wall, making a blue stripe, a red stripe, a white stripe, and a pink stripe. Pink is a mixture of red and white, not necessarily in equal amounts. When Bill finished, he had equal amounts of blue, red, and white paint left. Find the total number of ounces of paint Bill had left.

are positive real numbers such that

are perpendicular, find the greatest integer less than

A group of children held a grape-eating contest. When the contest was over, the winner had eaten

grapes, and the child in

grapes. The total number of grapes eaten in the contest was

. Find the smallest possible value of

is internally tangent to circle

at one vertex of

, are internally tangent to circle

at the other two vertices of

are all externally tangent to circle 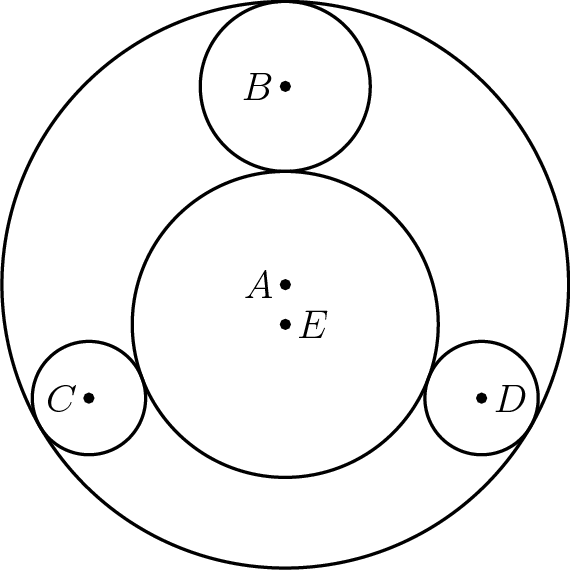 natural numbers so that at least two of the five numbers are consecutive. Find the remainder when

is expressed as a fraction in lowest terms, its denominator is

be the number of solutions in positive integers to the equation

be the number of solutions in positive integers to the equation

Four lighthouses are located at points

, and the lighthouse at

. To an observer at

are equal. To an observer at

are equal. The number of kilometers from

of positive integers with

. Find the sum of all possible values of the product

From the set of integers

so that no two pairs have a common element. Suppose that all the sums

are distinct and less than or equal to

. Find the maximum possible value of

be the endpoints of a semicircular arc of radius

. The arc is divided into seven congruent arcs by six equally spaced points

. All chords of the form

be the product of the lengths of these twelve chords. Find the remainder when

. Find the greatest integer less than or equal to

be a diameter of a circle with diameter