Two tangents are drawn to a circle from an exterior point

; they touch the circle at points

, and touches the circle at

, then the perimeter of 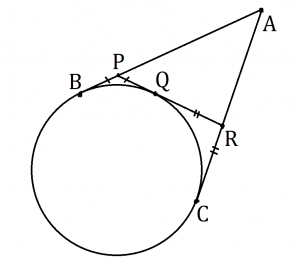 Draw the diagram as shown. Note that the two tangent lines from a single outside point of a circle have the exact same length, so

The perimeter of the triangle is

, so from substitution, the perimeter is

Thus, the perimeter of the triangle is

can be anywhere on the circle between

will be at the same point as

form a degenerate triable with side length

. So its perimeter will be

by power of a point, as

will "grow" to compensate, so the perimeter will stay constant with a value of

We can also skip verifying that the perimeter will stay constant, since it seems unlikely that MAA would create a question with