Let us make a chart of values in alphabetical order, where

are the probabilities that each string comes from

denotes the partial sums of 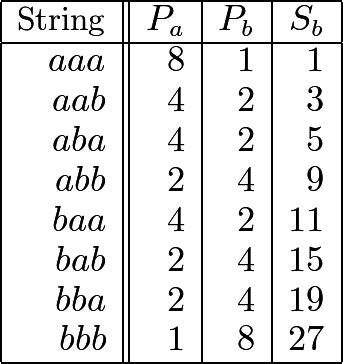 , so the answer turns out to be

. Compare the first letter of the string

to the first letter of the string

, then you do the same for the second letters of the strings. But you have to multiply the

as there is a

chance we will get to this step.

, then there is a

letter strings instead. If the first letters all get transmitted correctly, then the

string will be first. Otherwise, the only way is for both of the first letters to be the same, and then we consider the next

letter string following the first letter. This easily leads to a recursion:

will take the form

will take the form

. Then, the probability that both

and that the second letter of

. Now, if the last case is true then the probability that

. Therefore the total probability would be: