. There is a point

is a right angle. The ratio 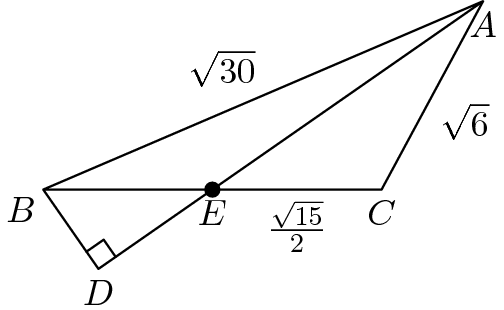 share the same height and have equal bases, and thus have the same area. Similarly,

share the same height, and have bases in the ratio

, and by the Pythagorean Theorem on

Because the problem asks for a ratio, we can divide each side length by

to make things simpler. We now have a triangle with sides

We use the same graph as above.

. Denote this point as

Adding the first and second, we obtain

, and then subtracting the third from this we find that

. (Note, we could have used Stewart's Theorem to achieve this result).

Subtracting the first and second, we see that

, and then we find that

Using base ratios, we then quickly find that the desired ratio is