The sides of rectangle

. An equilateral triangle is drawn so that no point of the triangle lies outside

. The maximum possible area of such a triangle can be written in the form

Consider points on the complex plane

, and the other two points

. Since it's equilateral, then

, and expanding we get 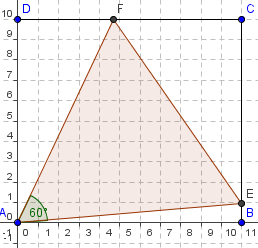 We can then set the real and imaginary parts equal, and solve for

of the equilateral triangle can be found by

, the area of the equilateral triangle is

This is a trigonometric re-statement of the above. Let

and the side of the equilateral triangle be

by the Pythagorean Theorem. Now

Thus, the area of the triangle is

, which yields the same answer as above.

degrees clockwise. Note that the image of

. Let the image of

. Since angles are preserved under rotation,

, it follows that quadrilateral

be its circumcenter. By Inscribed Angles,

. By the definition of circle,

. It follows that triangle

. Squaring and multiplying by