A car travels due east at

mile per minute on a long, straight road. At the same time, a circular storm, whose radius is

mile per minute. At time

, the center of the storm is

miles due north of the car. At time

minutes, the car enters the storm circle, and at time

We set up a coordinate system, with the starting point of the car at the origin. At time

and the center of the storm is at

is at the maximum point of the parabola, we can use

First do the same process for assigning coordinates to the car. The car moves

miles per minute to the right, so the position starting from

Take the storm as circle. Given southeast movement, split the vector into component, getting position

for the storm's center. This circle with radius 51 yields

Now substitute the car's coordinates into the circle's:

Simplifying and then squaring:

Forming into a quadratic we get the following, then set equal to 0, since the first time the car hits the circumference of the storm is

and the second is

The problem asks for sum of solutions divided by 2 so sum is equal to:

. Labeling the car's starting position A, the storm center B, and the right triangle formed by AB with a right angle at B and the car's path, we get the following diagram, with AD as our desired length since D is the average of the points where the car enters and exits the storm. 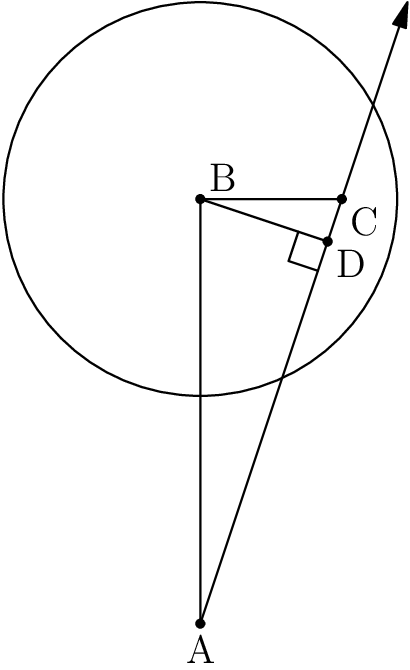 . The Pythagorean Theorem then gives

. The Pythagorean Theorem now gives the car's speed as