Each of the sides of five congruent rectangles is labeled with an integer. In rectangle A,

. These five rectangles are placed, without rotating or reflecting, in position as below. Which of the rectangle is the top leftmost one? 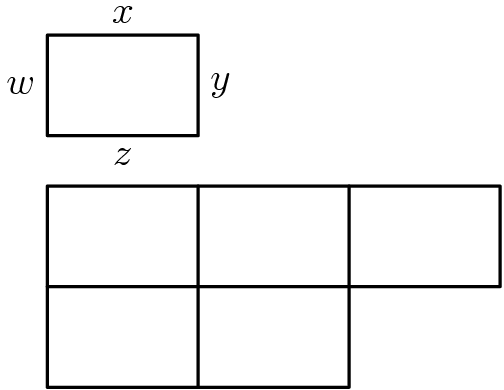 is an integer that is as large as possible, what is the value of

are digits for which

what is the value of

A square with sides of length

is divided into two congruent trapezoids and a pentagon, which have equal areas, by joining the center of the square with points on three of the sides, as shown. Find

, the length of the longer parallel side of each trapezoid. 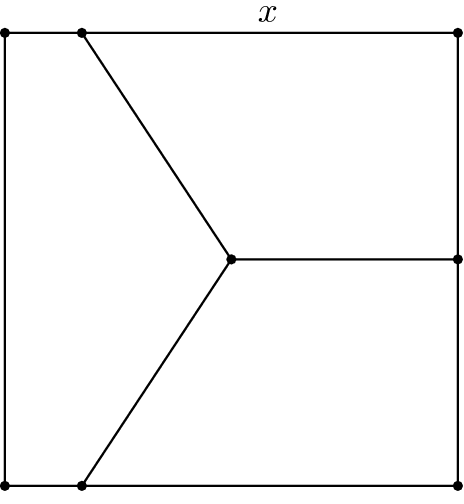 . What is the area of the large square? 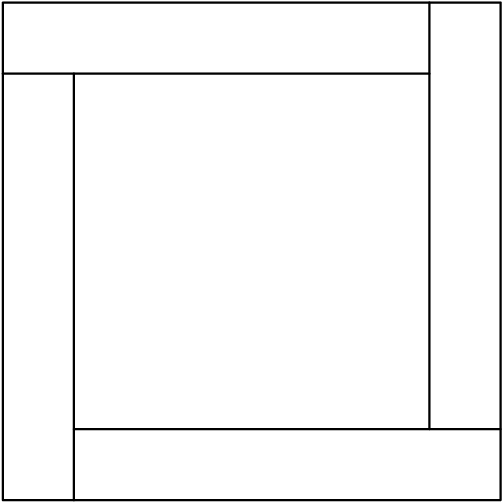 be a rectangle. How many circles in the plane of

have a diameter both of whose endpoints are vertices of

How many different prime numbers are factors of

. Which of he following could not be the sum of the upper four faces?

A parabola has vertex of

intercepts, one positive, and one negative. If this parabola is the graph of

, all of whose centers are collinear. The ratio of the area, of the shaded region to that of the unshaded region is 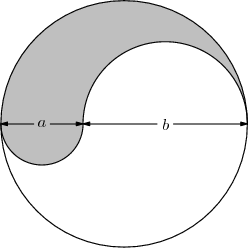 be a function with the two properties:

(a) for any two real numbers

A right circular cone of volume

, a right circular cylinder of volume

, and a sphere of volume

all have the same radius, and the common height of the cone and the cylinder is equal to the diameter of the sphere. Then

How many triangles have area

Three cards, each with a positive integer written on it, are lying face-down on a table. Casey, Stacy, and Tracy are told that

(a) the numbers are all different,
(b) they sum to

, and
(c) they are in increasing order, left to right.

meters ahead of Windy when Sunny finishes the race. The next time they race, Sunny sportingly starts

meters behind Windy, who is at the starting line. Both runners run at the same constant speed as they did in the first race. How many meters ahead is Sunny when Sunny finishes the second race?

, and for no other values of

memorable if the prefix sequence

is exactly the same as either of the sequences

(possibly both). Assuming that each

can be any of the ten decimal digits

, the number of different memorable telephone numbers is

cube is composed of twenty-seven

cubes. The big cube is ‘tunneled’ as follows: First the six

cube are removed as shown. Second, each of the twenty remaining

cubes is diminished in the same way. That is, the center facial unit cubes as well as each center cube are removed. The surface area of the final figure is

in the plane is called a lattice point if both

are integers. The area of the largest square that contains exactly three lattice points in its interior is closest to

is odd. The rightmost nonzero digit of