The coordinates of the vertices of isosceles trapezoid

are all integers, with

. The trapezoid has no horizontal or vertical sides, and

are the only parallel sides. The sum of the absolute values of all possible slopes for

For simplicity, we translate the points so that

is on the origin and

has integer coordinates; then

is a vector with integer parameters (vector knowledge is not necessary for this solution). We construct the perpendicular from

across that perpendicular. Then

is a parallelogram, and

to have integer coordinates, it suffices to let 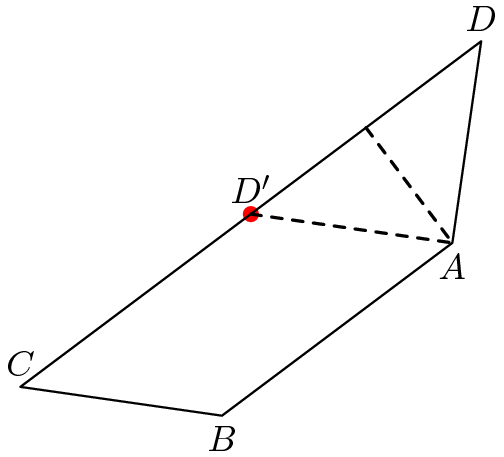 Let the slope of the perpendicular be

. Then the midpoint of

is an integer, then

must be an integer. There are

pairs of integers whose squares sum up to

. We exclude the cases

because they lead to degenerate trapezoids (rectangle, line segment, vertical and horizontal sides). Thus we have

. Therefore, the corresponding slopes of

. The sum of their absolute values is

^ In other words, since

to the origin. Suppose point

is the slope we're looking for. Note that point

must be of the form:

. Note that we want the slope of the line connecting

are parallel. Instead of dealing with the 12 cases, we consider point

where we plug in the necessary values for

after simplifying. Since the slopes of

. Plugging in the possible values of

in heir respective pairs and ruling out degenerate cases, we find the sum is

(Note: This Solution is a lot faster if you rule out