congruent triangles by its diagonals (like in the pictures in the problem). This shows that the number of diamonds it contains is equal to

th triangular number (i.e. the diamonds within the triangles or between the diagonals) and

(the diamonds on sides of the triangles or on the diagonals). The

. Putting this together for

Color the diamond layers alternately blue and red, starting from the outside. You'll get the following pattern:

, the blue diamonds form a

square, and the red diamonds form a

square. Hence the total number of diamonds in

be the number of diamonds in

. We now know that 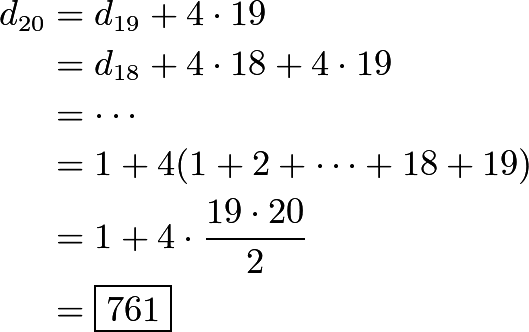 , so we see that the second finite difference is constant. Thus,

can be represented as a quadratic,

. However, we already know

Solving this system for