labeled as shown below, has edge length

and is cut by a plane passing through vertex

respectively. The plane divides the cube into two solids. The volume of the larger of the two solids can be written in the form

Define a coordinate system with

at the origin and

It follows that the plane going through

be the intersection of this plane and edge

is on the plane. Also,

lies on the extensions of segments

is a right triangular pyramid. Note also that pyramid

and thus the volume of solid

which is one of the solids bounded by the cube and the plane, is

But the volume of

is simply the volume of a pyramid with base

Note, however, that this volume is less than

and thus this solid is the smaller of the two solids. The desired volume is then

Define a coordinate system with

. The plane formed by

. It intersects the base of the unit cube at

. The z-coordinate of the plane never exceeds the height of the unit cube for

. Therefore, the volume of one of the two regions formed by the plane is

be the intersection of the plane with edge

be the distance from face

be the height parallel to

of the cross-sectional triangle at that distance, and

be the area of the cross-sectional triangle at that distance.

Thus the volume of the larger solid is

Alternative Solution : think inside the box

The volume of a frustum is

is the area of the base and

is the height from the chopped off apex to the base.

We can easily see that from symmetry, the area of the smaller front base is

and the area of the larger back base is

Now to find the height of the apex.

and (call the intersection of the plane with

we can easily find the total height of the triangle

Now straight from our formula, the volume is

Thus the answer is:

Alternative Solution : think inside the box with pyramids

We will solve for the area of the smaller region, and then subtract it from 1.

be the point where plane

can be split into triangular pyramid

, so the volume of

, so the volume of

Adding up the volumes of

, we find that the volume of

. Therefore the volume of the larger solid is

This is basically mathtiger6's solution, but you don't need coordinates or thinking outside the box. 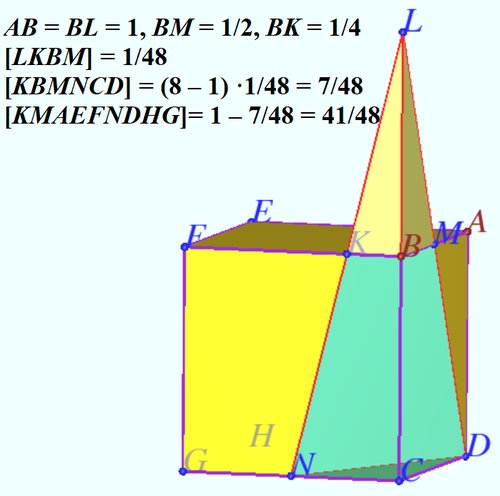