be the unique complex number with the properties that

is a real number and the imaginary part of

is the greatest possible. Find the real part of

This problem is pretty obvious how to bash, and indeed many of the solutions below explain how to do that. But there’s no fun in that, and let’s see if we can come up with a slicker solution that will be more enjoyable.

, let’s graph them and hope that the geometric visualization adds insight to the problem. 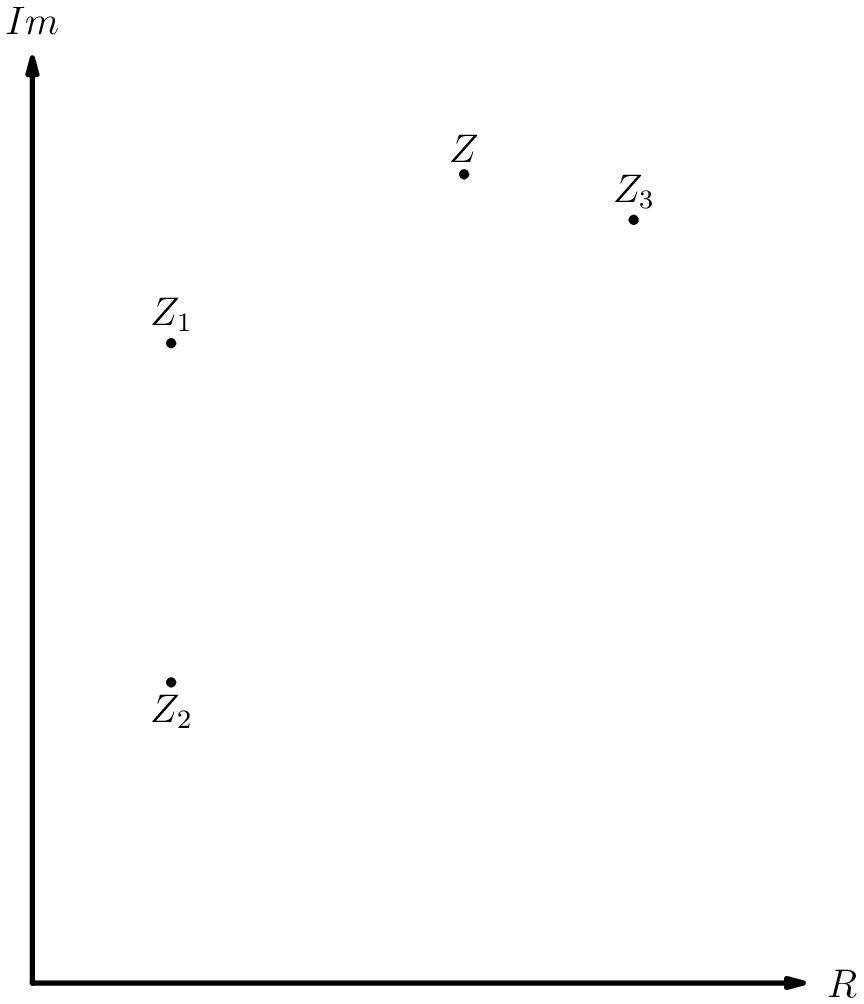 Note that when we subtract two vectors, the geometric result is the line segment between the two endpoints of the vectors. Thus we can fill in 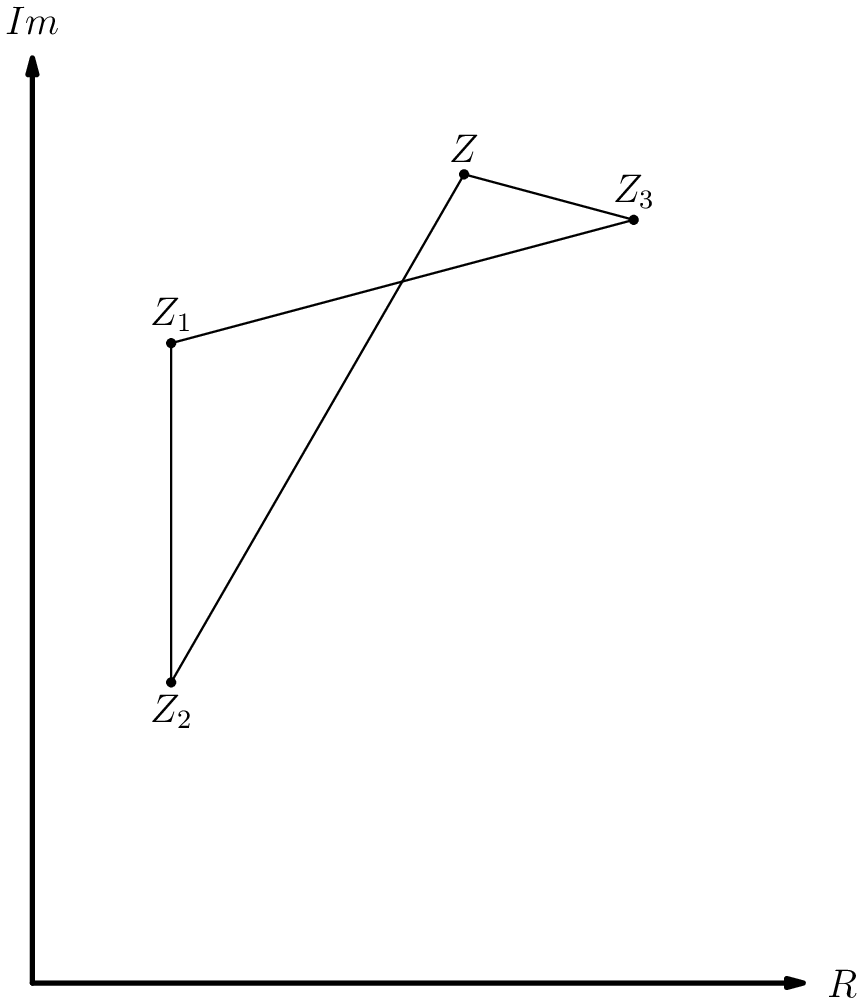 , so let’s try to prove that they are congruent. We can show this in two ways;

Let’s look back at the information given to us. The problem states that

. But how do we relate this expression to our angles? Well, let’s take a look at the divisions themselves.

The subtraction of two vectors yields a vector, and we can write any vector division as

is a complex number, as the division of two vectors also yields a vector. We can rewrite this as

. We can think of this expression as transforming

Thus we can rewrite our previous equation as

, where the angle of

equals the angle between

. More precisely, we can write

, respectively by Euler’s formula. Then

is the claim we wish to prove.

We can now do some simple algebra to prove this;

is obviously real, so

must be real as well. But the only way that can happen is if

as some complex number with form

The product must be real, so we have that

is real by definition, so dividing the real number above by

will still yield a real number. (Note that we can see that

from the definitions of

is real. The imaginary part of this is

which we recognize as

, and the angle we want is the minor angle, so we can rewrite the equation as

. We can see from the diagram that both

are obtuse, so therefore

Now that we’ve proven this fact, we know that all four points lie on a circle (intuitively one can also observe this because

satisfy the property in the question, and

techincally gives no imaginary part), so let’s draw that in; 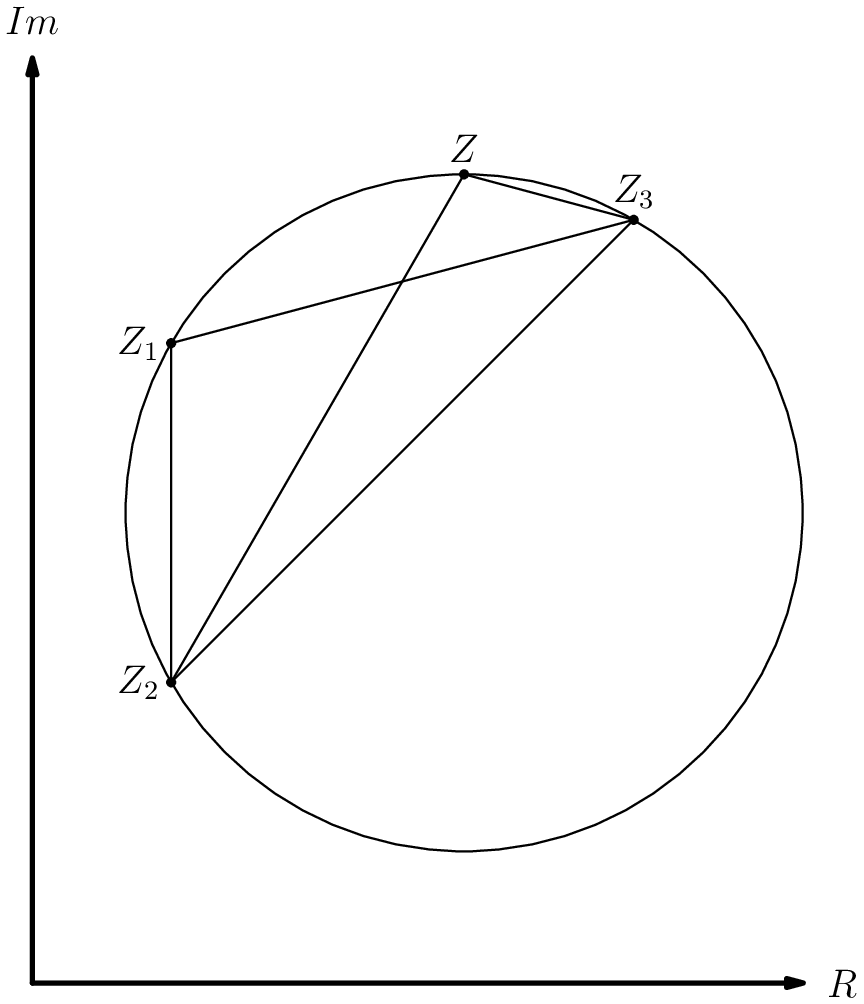 that satisfy the problem requirements. However, we want to find the real part of the

Consider the perpendicular bisectors of

. Since any chord can be perpendicularly bisected by a radius of a circle, these two lines both intersect at the center. Since

is vertical, the perpendicular bisector will be horizontal and pass through the midpoint of this line, which is (18, 61). Therefore the equation for this line is

is nice because it turns out the differences in the x and y values are both equal (60) which means that the slope of the line is 1. The slope of the perpendicular bisector is therefore -1 and it passes through the midpoint, (48,69), so the equation of this line is

is maximized or when

for some real numbers

Multiplying both the numerator and denominator by the conjugate of the denominator, we get:

In order for the product to be a real number, since both denominators are real numbers, we must have the numerator of

be a multiple of the conjugate of

for some real number

which can be rewritten as:

Now, common sense tells us that to maximize

, we would need to maximize

. Therefore, we must set

to its lowest value, namely 0. Therefore,

You can also notice that the ab terms cancel out so all you need is the x-coordinate of the center and only expand the a parts of the equation.

Solution 4 (algebra but much cleaner)

. We now have that

is real, meaning that

, so we now have that

, which can be rewritten as

. In order to maximize

we want to maximize

, and in order to maximize

is the imaginary part of

is the real part of

We will just bash. Let

after doing some calculations. We also see that

because the numerator has to be real. Thus, expanding it out, we see that

To maximize the imaginary part,