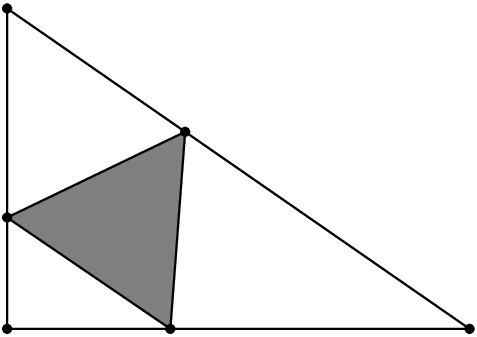 Employ the same complex bash as in Solution 4, but instead note that minimizing

is the same as minimizing the distance from 0,0 to x,y, since they are the same quantity. We use point to plane instead, which gives you the required distance.

We can use complex numbers. Set the origin at the right angle. Let the point on the real axis be

and the point on the imaginary axis be

Now we switch back to Cartesian coordinates. The equation of the hypotenuse is

This means that the point

is on the line. Plugging the numbers in, we have

Now, we note that the side length of the equilateral triangle is

so it suffices to minimize that. By Cauchy-Schwarz, we have

Thus, the area of the smallest triangle is

We will use coordinates. Let the right triangle's lower left point be at the origin. Notice that 2 points will determine a unique equilateral triangle. Let 2 points be on the x-axis (B) and y-axis (A) and label them (b, 0) and (0, a) respectively. The third point (C) will then be located on the hypotenuse. We proceed to find the third point's coordinates in terms of a and b. (There are many ways to do it the following is how I did it).

2. Let AB=x. For ABC to be an equilateral triangle, the altitude from C to AB must be

3. We then have two equations and two unknowns and can solve for C's coordinates.

We can find C is

Also, note that C must be on the hypotenuse of the triangle, whose equation is

We can plug in x and y as the coordinates of C. We can then simplify the equation to

We aim to minimize the side length of the triangle, which is

This situation is perfect for Cauchy Schwartz Inequality. We can have the 2 sets being

From here, we can find the minimum area is

which gives us the final answer of 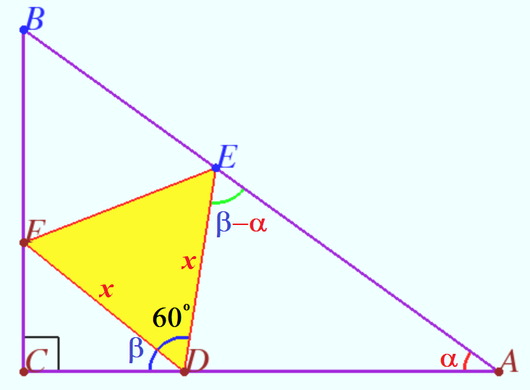 By Law of Sines on triangle

in argand plane, the distance of

. We know that the slope of

, after computation, we have

Now the rest is easy with C-S inequality,

so the smallest area is