A pyramid has a triangular base with side lengths

. The volume of the pyramid is

Let the triangular base be

. We find that the altitude to side

Let the fourth vertex of the tetrahedron be

, and let the midpoint of

perpendicular to the plane of

will pass through the circumcenter of

, which we will call

is equidistant from each of

Squaring both sides, we have

We now find that

. Using the Pythagorean Theorem on triangle

(all three are congruent by SSS):

Finally, by the formula for volume of a pyramid,

NOTE : If you don’t know or remember the formula for the volume of a triangular pyramid, you can derive it using calculus as follows :

Take a small triangular element in the pyramid. We know that it’s area is proportional to the height from the vertex to the base. Hence, we know that

. Now integrate it taking the limits

Here is a shortcut for finding the radius

As before, we find that the foot of the altitude from

lands on the circumcenter of

. Then we write the area of

respectively, and solving for

Then continue as before to use the Pythagorean Theorem on

, and find the volume of the pyramid.

We can place a three dimensional coordinate system on this pyramid. WLOG assume the vertex across from the line that has length

is at the origin, or

. Then, the two other vertices can be

. Let the fourth vertex have coordinates of

. We have the following

equations from the distance formula.

Adding the last two equations and substituting in the first equation, we get that

. If you drew a good diagram, it should be obvious that

. So, the height of the pyramid is

. The base is equal to the area of the triangle, which is

Label the four vertices of the tetrahedron and the midpoint of

, and notice that the area of the base of the tetrahedron,

Notice that the altitude of

is the height of the tetrahedron. Side

is can be found using the Pythagorean Theorem on

Using Heron's Formula, the area of

can be rewritten as differences of squares; thus, the expression can be written as

From this, we can determine the height of both

; therefore, the volume of the tetrahedron equals 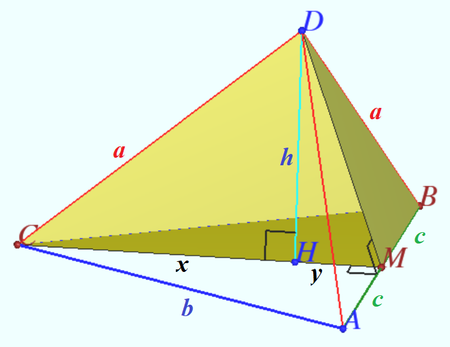 Notation is shown on diagram.