, and Eve starting at

. When Paul meets Eve, he turns around and runs toward

. Paul and Ina both arrive at

at the same time. Find the number of meters from

recursively to be the remainder when

such that the base-

is a perfect square and the base-

is a perfect cube.

be the area enclosed by

, that is, the total area of the six triangular regions. Then

. Then there are real numbers

is chosen randomly and uniformly from the interval

. The probability that the roots of the polynomial

are all real can be written in the form

. The segments cut the triangle into

triangle. Each of the

regions has the same area. Find the number of segments

, that have rational length.

A frog is positioned at the origin of the coordinate plane. From the point

, the frog can jump to any of the points

. Find the number of distinct sequences of jumps in which the frog begins at

on a short side of the rectangle, as shown. Let

, and partition the octagon into 7 triangles by drawing segments

. Find the area of the convex polygon whose vertices are the centroids of these 7 triangles. 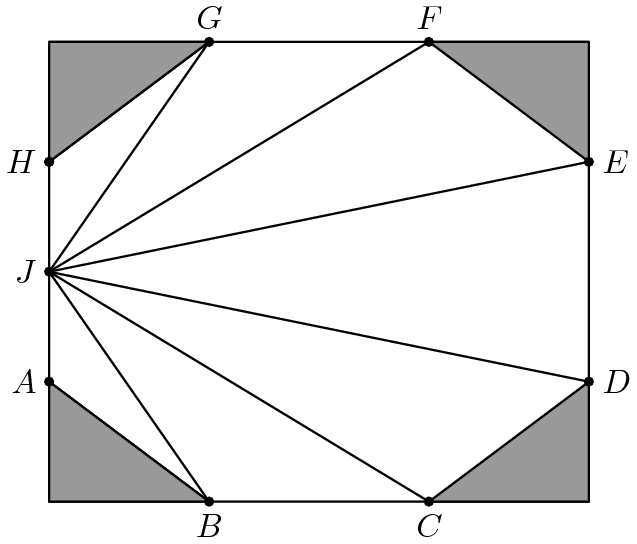 Find the number of permutations of

such that for each

, at least one of the first

Misha rolls a standard, fair six-sided die until she rolls 1-2-3 in that order on three consecutive rolls. The probability that she will roll the die an odd number of times is

be the other intersection of

to the integers such that