. Then there are real numbers

The First (pun intended) thing to notice is that

have a similar structure, but not exactly conjugates, but instead once you take out the magnitudes of both, simply multiples of a root of unity. It turns out that root of unity is

. Anyway this results in getting that

. Then substitute this into

to get, after some calculation, that

, you could do the same thing with

looks like it's easier due to it being smaller. Anyway you get

. Then add all three up, it turns out easier than it seems because for

disappears after you expand the root of unity (e raised to a specific power). Long story short, you get

First we evaluate the magnitudes.

. Divide to find that 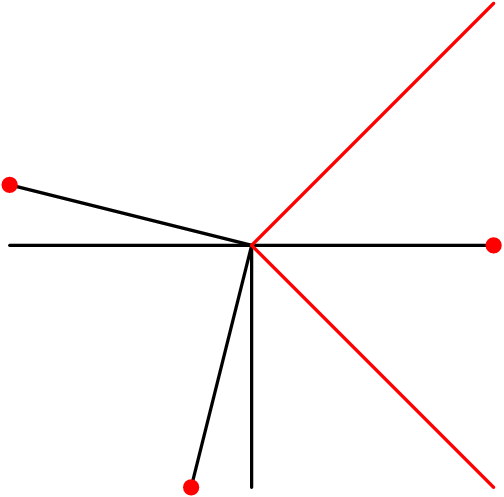 This allows us to see that the argument of

, and the argument of

. We need to convert the polar form to a standard form. Simple trig identities show

. More division is needed to find what

Solve this system the way you would if the RHS of all equations were real. Multiply the first and 3rd equations out and then factor out

, then use standard techniques that are used to evaluate square roots of irrationals. let

. Both will give us the same answer, so use the positive one. Divide

to get a real product, so you find

. Now, add the real and imaginary parts separately to get

Dividing the first equation by the second equation given, we find that

. Substituting this into the third equation, we get

is the negative of that of

, and their magnitudes multiply to

, we can use the previous substitution we made to find that

. Cross-multiplying the fractions we get

. Now we can rewrite this as

. We can see that

.We also can see that

because there is no real term in

we solve by doing system of equations that

. Multiplying by the conjugate of the denominator (

) in the numerator and the denominator and we get

We can solve for z and get

. Now we know what

are, so all we have to do is plug and chug.

is our final answer.(David Camacho)

We observe that by multiplying

in the form of

Solving this system of equations is relatively

simple. We have two cases,

to the two equations. We see

Solving, we end up with

Again, we solve for

Solution 7 (Based on advanced mathematical knowledge)

According to the Euler's Theory, we can rewrite

Also, it is clear that

So now we have

. Solve these above, we get

So we can get

we can find that

As a result, we finally get

We can turn the expression

, and this would allow us to plug in the values after some computations.

Based off of the given products, we have

Dividing by the given products, we have

Simplifying, we get that this expression becomes