During AMC testing, the AoPS Wiki is in read-only mode. No edits can be made.
AoPS Wiki
Resources Aops Wiki 2021 AIME II Problems/Problem 14

be an acute triangle with circumcenter

be the intersection of the line tangent to the circumcircle of

and the line perpendicular to

. Given that the measures of

the degree measure of

is the center of the spiral similarity sending

In this solution, all angle measures are in degrees.

Together, we conclude that

By angle addition, we have 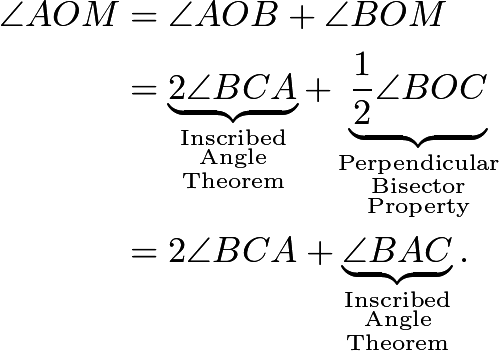 For the sum of the interior angles of

looks isosceles, so we assume it's isosceles. Then, let

Taking the sum of the angles in the triangle gives

. Now, note that since

is cyclic. Also, because

is also cyclic. Now, we define some variables: let

be the constant such that

(due to the fact that

is tangent to the circumcircle at

. To finish the problem, we simply compute