During AMC testing, the AoPS Wiki is in read-only mode. No edits can be made.
AoPS Wiki
Resources Aops Wiki 2021 AIME II Problems/Problem 2

lies on the same side of line

is isosceles, and the ratio of the area of 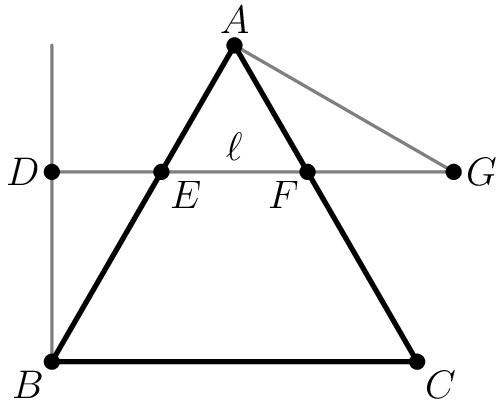 By the side-length ratios in

Let the brackets denote areas. We have

We set up and solve an equation for 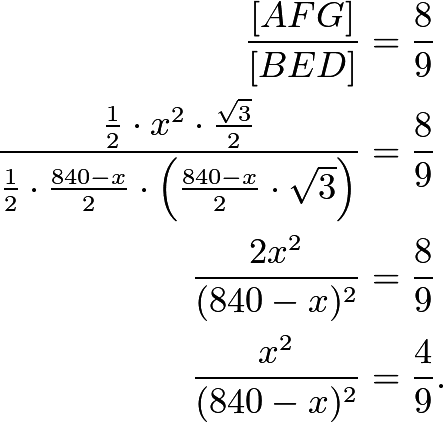 it is clear that

Therefore, we take the positive square root for both sides:

We express the areas of

in order to solve for

Let the height of

and the height of

Then we have that

Because we are given that

This allows us to use the sin formula for triangle area: the area of

Now we can make an equation:

To make further calculations easier, we scale everything down by

(while keeping the same variable names, so keep that in mind).

Because we scaled down everything by

the actual value of

is isosceles, it means that

Now, as we know that the ratio of the areas of

Substituting the values, we get

. Solving this, we easily get

, and since these triangles share an altitude, they must have the same area.

is clearly congruent to both

, and thus each of these new triangles has the same area as

over to make it adjacent to

, thus creating an equilateral triangle whose area has a ratio of 18:8 when compared to

(based on our conclusion from the first paragraph). Since these triangles are both equilateral, they are similar, and since the area ratio 18:8 reduces to 9:4, the ratio of their sides must be 3:2. So, because

represent sides of these triangles, and they add to 840,