are drawn for all

, no point strictly between

lies on more than 1 of the segments. Find the number of bounded regions into which this figure divides the plane when

. The figure shows that there are 8.0 regions when

We can use recursion to solve this problem:

, then put one point

because there are 6 regions.

new regions (and we are not going to count them again), and split the existing regions. Let's focus on the spliting process: line segment formed between

regions (we already count one region at first), then

regions (we already count one region at first), 4 points, etc. So, we have:

3. If you still need one step to understand this:

regions, etc. Thus, we have:

Note: we could deduce a general formula of this recursion:

is the number of points on

We want to derive a general function

that indicates the number of bounded regions. Observing symmetry, we know this is a symmetric function about

, which is the difference caused by adding one point to the existing

bounded regions; when connected to point #2 on

. Not very difficult to figure out:

makes us more confident about the formula. Now plug in

, we get the final answer of 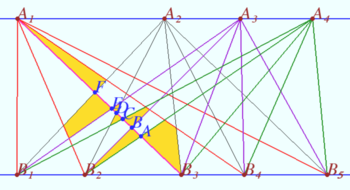 Let some number of segments be constructed. We construct a new segment. We start from the straight line

) and enter one of the points of the line

The exception is the only first segment

Each point of intersection of two segments is determined uniquely by the choice of pairs of points on each line.

The number of such pairs is

Exactly one segment comes to each of the

points of the line

from each of the

points of the line

The total number of arrivals is equal to

Hence, the total number of bounded regions is

, we get the final answer of