of the crowd of people at a concert. After a bus carrying

more people arrived, adults made up

Azar, Carl, Jon, and Sergey are the four players left in a singles tennis tournament. They are randomly assigned opponents in the semifinal matches, and the winners of those matches play each other in the final match to determine the winner of the tournament. When Azar plays Carl, Azar will win the match with probability

. Assume that outcomes of different matches are independent. The probability that Carl will win the tournament is

A right square pyramid with volume

has a base with side length

There is a positive real number

not equal to either

Twenty distinct points are marked on a circle and labeled

in clockwise order. A line segment is drawn between every pair of points whose labels differ by a prime number. Find the number of triangles formed whose vertices are among the original

-tuples of numbers, the greatest value that

A circle with radius

is externally tangent to a circle with radius

. Find the area of the triangular region bounded by the three common tangent lines of these two circles.

whose value can be uniquely determined when the values of

are drawn for all

, no point strictly between

lies on more than two of the segments. Find the number of bounded regions into which this figure divides the plane when

. The figure shows that there are 8 regions when

such that the bisectors of acute angles

intersect at the midpoint of

Find the square of the area of

be real numbers with

Find the least possible value of

There is a polynomial

with integer coefficients such that

Find the coefficient of

cents that contain at least one stamp of each denomination. If there exists such a collection that contains sub-collections worth every whole number of cents up to

be the minimum number of stamps in such a collection. Find the sum of the three least values of

for some choice of

, as shown. Suppose that

is a convex hexagon. Find the area of this hexagon. 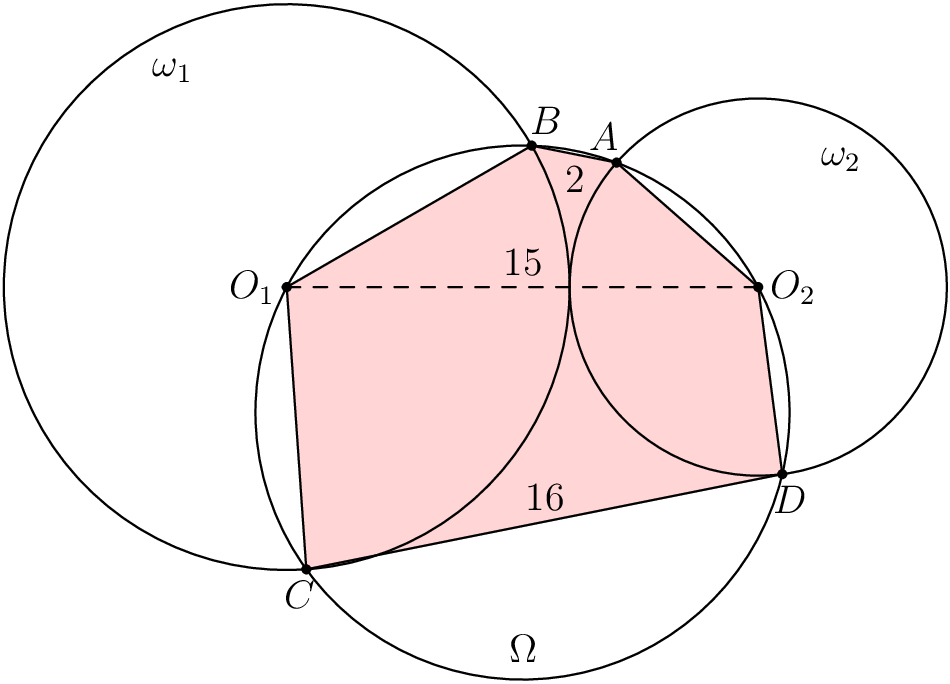