During AIME testing, the AoPS Wiki is in read-only mode. No edits can be made.
AoPS Wiki
Resources Aops Wiki 2022 AMC 8 Problems/Problem 25

A cricket randomly hops between

leaves, on each turn hopping to one of the other

leaves with equal probability. After

hops what is the probability that the cricket has returned to the leaf where it started? 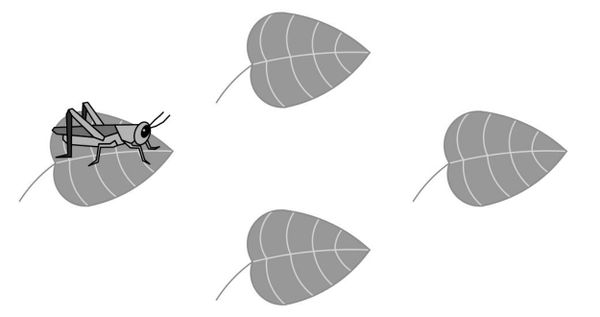 denote the leaf where the cricket starts and

denote one of the other

We apply casework to the possible paths of the cricket:

Together, the probability that the cricket returns to

We can label the leaves as shown below: 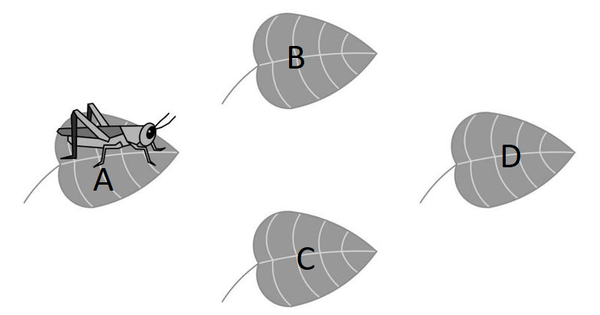 Carefully counting cases, we see that there are

ways for the cricket to return to leaf

after four hops if its first hop was to leaf

By symmetry, we know that there are

ways if the cricket's first hop was to leaf

ways if the cricket's first hop was to leaf

ways in total for the cricket to return to leaf

possible ways altogether for the cricket to hop to any other leaf four times, the answer is

hops. Then, we get the recursive formula

because if the leaf is not on the target leaf, then there is a

probability that it will make it back.

With this formula and the fact that

(After one hop, the cricket can never be back to the target leaf.), we have

denote the leaf cricket starts at, and

be the other leaves, similar to Solution 2.

be the probability the cricket lands on

be the probability the cricket lands on

the probability that the cricket land on each leaf after

hops. So, we have

We construct the following table: 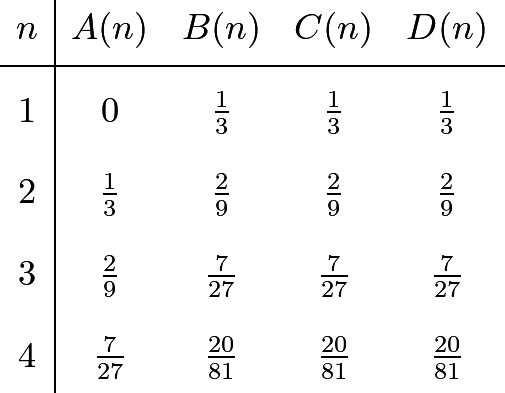 Assign the leaves to

be the starting leaf. We then use generating functions with relation to the change of leaves. For example, from

would be a change of

would be a change of

This generating function is equal to

is a positive integer. One application of roots of unity filter gives us a successful case count of

This problem is a reduced version of 1985 AIME Problem 12, changing