, which we can now write as

. The former would imply that

is a parallelogram, which it isn't; therefore we conclude

. On one hand, since

whereas, on the other hand, using cosine formula to get the length of

in the above two equations and solving for

is the longest of the four sides of

. Then, the triangle area equation becomes

What an important finding! Note that the opposite sides

have equal length, and note that diagonal

. This is very similar to what happens if

were a parallelogram with

is a parallelogram. In other words,

, the triangle is isosceles, and

. Note that in parallelogram

We use the Law of Cosines on

Subtracting the second equation from the first yields

This means that dropping an altitude from

Just to be complete --

can actually be equal. In this case,

must be equal to

. We get the same result. -Mathdummy.

Solution 3 (Another way to get the middle point)

So, let the area of

, then it is easy to show that

we can find out that

Solution 4 (With yet another way to get the middle point)

. Using the formula for the area of a triangle, we get

. Using the cosine rule for

Plugging this back to equations

, it can be solved that

. Then, the area of the quadrilateral is

As in all other solutions, we can first find that either

, but it's an AIME problem, we can take

, and assume the other choice will lead to the same result (which is true).

By Law of Cosines,

Substituting equations 1 and 2 into 3 and rearranging,

. By Law of Cosines on

Now we prove P is the midpoint of

. Denote the height from

.According to the problem,

. Then according to basic congruent triangles we get

. Applying Stewart theorem, getting that

solve for a, getting

Now everything is clear, we can find

, the whole area is 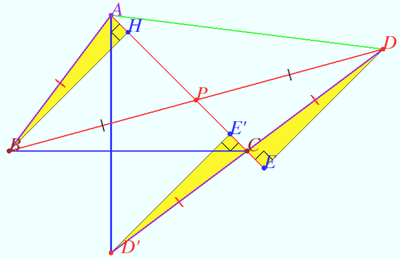 as in another solutions.

be the point symmetrical

be the foot of perpendiculars from

The area of quadrilateral

is equal to the area of triangle