In the adjoining figure, two circles with radii

are drawn with their centers

, one of the points of intersection, a line is drawn in such a way that the chords

have equal length. Find the square of the length of 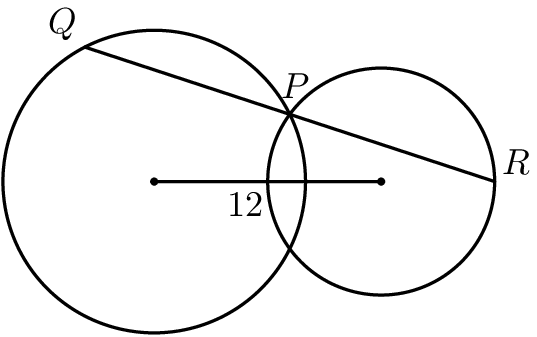 Note that some of these solutions assume that

lies on the line connecting the centers, which is not true in general. It is true here only because the perpendicular from

passes through through the point where the line between the centers intersects the small circle. This fact can be derived from the application of the Midpoint Theorem to the trapezoid made by dropping perpendiculars from the centers onto

Firstly, notice that if we reflect

, we can reflect circle

to get another circle (centered at a new point

. The rest is just finding lengths, as follows.

is a median of

, we can find the third side of the triangle using Stewart's Theorem or similar approaches. We get

. Now we have a kite

, and all we need is the length of the other diagonal

. The easiest way it can be found is with the Pythagorean Theorem. Let

Solving this equation, we find that 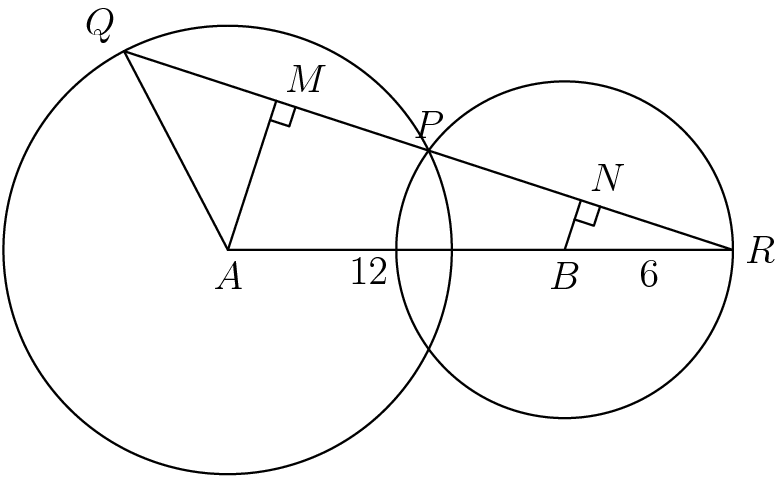 Draw additional lines as indicated. Note that since triangles

are isosceles, the altitudes are also bisectors, so let

are similar. If we let

Applying the Pythagorean Theorem on triangle

must add up to

Taking the cosine of both sides, and simplifying using the addition formula for

as well as the identity

. Extend the line containing the centers of the two circles to meet

, and to meet the other side of the large circle at a point

The part of this line from

to the point nearest to

where it intersects the larger circle has length

. The length of the diameter of the larger circle is

Thus by Power of a Point in the circle passing through 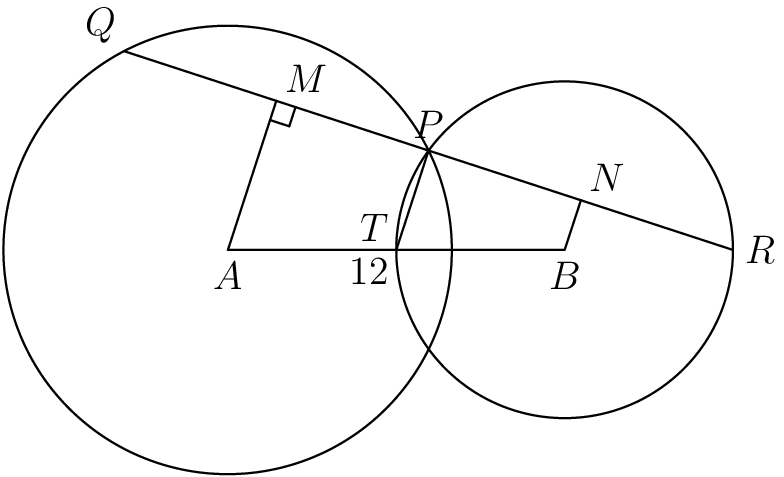 Note that the midpoint of

From the median formula,

, from the Pythagorean Theorem,

Looking at Drawing 2 (by the way, we don't need point

, and the desired length

. We know that a radius perpendicular to a chord bisects the chord, so

, and we see that they are radii of Circles

, respectively. We can write the Pythagorean relationships

, and form another right traingle. From that triangle, you can see that the shorter leg is on the left side, having length

, the longer leg is the same as

, and the hypotenuse is

. We can write the Pythagorean relationship

. Solving the system of 3 unknowns and 3 equations (One of the best ways to do it is to solve for

in the first equation and

in the second equation, and substitute into the third equation, get an equation only in terms of

, and solve), you find that

Solution 7 (Note: Assumption that R is collinear to the centers)

Assume that the centers are collinear, you can also prove it (but that is already given). Drop a perpendicular from

to the lines that the centers are on. You then have 2 separate segments, separated by the foot of the altitude of

respectively. Call the measure of the foot of the altitude of

. You then have 3 equations:

(this is given by the fact that the distance between the centers is 12.

. This is given by the fact that P is on the circle with radius 8.

. This is given by the fact that P is on the circle with radius 6.

Full Proof that R, A, B are collinear 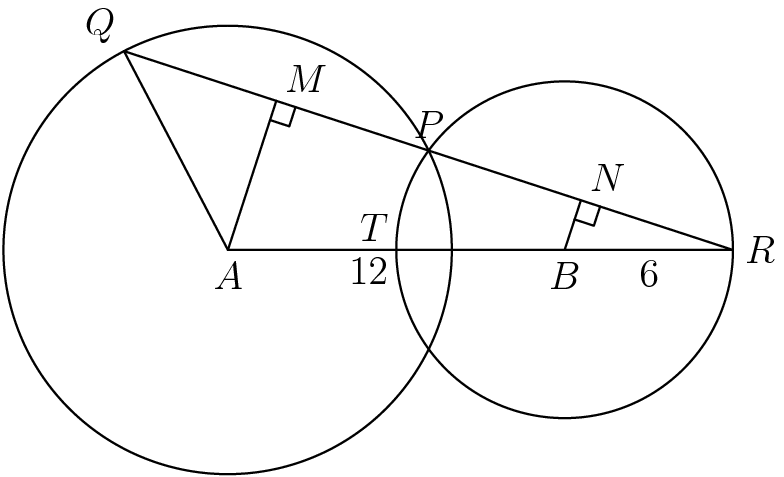 be the feet of the perpendicular from

respectively. It is well known that a perpendicular from the center of a circle to a chord of that circle bisects the chord, so

, since the problem told us

We will show that

be the intersection of circle centered at

' be the foot of the perpendicular from

is a midline (or midsegment) in trapezoid

(they are both supposed to be the midpoint of

). In other words, since

is a diameter, as desired. Thus

NOTE: Note this collinearity only follows from the fact that

in the problem statement. The collinearity is untrue in general.

We use coordinate geometry to approach this problem. Let the center of larger circle be the origin

, the smaller circle be

. Hence, we can get the two circle equations:

. Noting that it lies on both circles, we can plug the coordinates into both equations:

into equation 2 and solving for

. The problem asks us to find

, which is congruent to

. Using the distance formula for

(by Solution 7's collinear proof), we get