is defined on the complex numbers by

are positive numbers. This function has the property that the image of each point in the complex plane is equidistant from that point and the origin. Given that

Suppose we pick an arbitrary point on the complex plane, say

. According to the definition of

this image must be equidistant to

. Thus the image must lie on the line with slope

and which passes through

, so its graph is

By the Pythagorean Theorem, we have

must fall on the line

, given the equidistant rule. By

is equidistant from the origin and 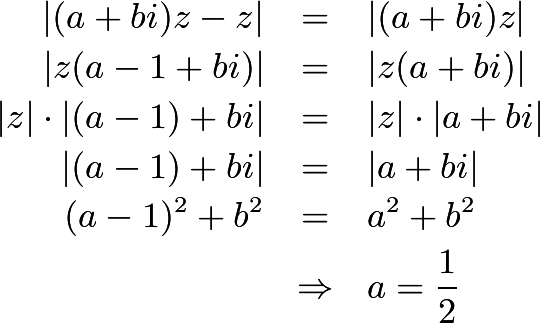 be the points in the complex plane represented by

. Also, we are given

. Notice that the base angle of this isosceles triangle is equal to the argument

of the complex number

forms an angle of

, and you end up with a right triangle that shows

lies in the first quadrant and

Similarly to in Solution 3, we see that

. Expanding both sides of this equation (after squaring, of course) and canceling terms, we get

and we proceed as above to get

This is a solution that minimizes the use of complex numbers, turning this into an introductory algebra analytic geometry problem.

on the complex plane. Then

on the complex plane. The equation for the line

Let the image of point

, after the point undergoes the function. Since each image is equidistant from the preimage and the origin,

must be on the perpendicular bisector of

. Since the slopes of two respectively nonvertical and nonhorizontal lines have a product of

, using the point-slope form, the equation of the perpendicular line to

, thus we plug in

. Since this is an identity for any

(or simply think of

being the distance of

to the origin). Thus plug in

are relatively prime, the final result is