lies in the cartesian plane and has an area of

respectively, and the coordinates of

The line containing the median to side

Find the largest possible value of 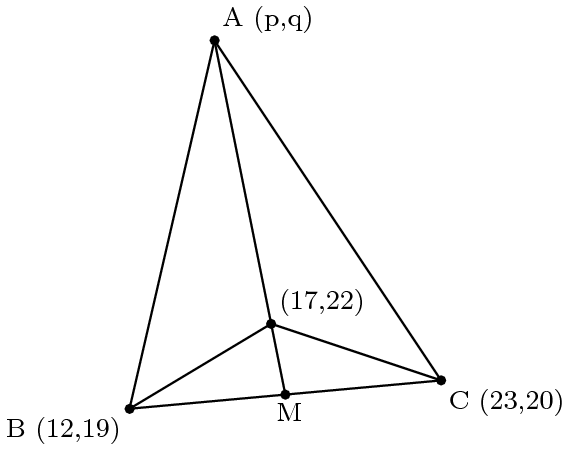 . The equation of the median can be found by

. Cross multiply and simplify to yield that

Use determinants to find that the area of

(note that there is a missing absolute value; we will assume that the other solution for the triangle will give a smaller value of

, which is provable by following these steps over again) (alternatively, we could use the Shoelace Theorem). We can calculate this determinant to become

Setting this equation equal to the equation of the median, we get that

Using the equation of the median from above, we can write the coordinates of

. In general form, the line is

(which is the height of

. Now we need the length of

, which lies along the line through

can be computed in a number of ways (one possibility: extend

until it hits the line

, and subtract one triangle from another), and each such calculation gives an area of 14. This is

of our needed area, so we simply need the point

to be 5 times as far from

, and the sum of coordinates will be larger if we take the positive value, so

Plug points into the Shoelace Theorem. This will provide you with the equation

. The find the midpoint of the line

. Now using this post and the given slope of the median,

, using basic algebra we can find the equation of the median which is

. Now that we have been given

plug this equation back into

. The result is the equation

is the greater sum so the answer is