is concurrent with line

is an isosceles trapezoid so

, using Law of Cosines on

to both sides gives

Draw the perpendiculars from

, labeling the intersection points as

. Also, if we draw the horizontal line extending from

, we find another right triangle

. The Pythagorean Theorem yields that 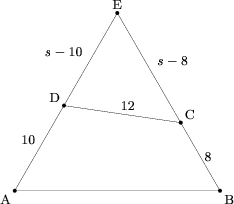 to an intersection at point

. We get an equilateral triangle

. We denote the length of a side of

and solve for it using the Law of Cosines:

; the quadratic formula yields the (discard the negative result) same result of

. Draw a line from

so that it intersects

. Then, apply Stewart's Theorem on

By the quadratic formula (discarding the negative result),

for a final answer of