During AMC testing, the AoPS Wiki is in read-only mode. No edits can be made.
AoPS Wiki
Resources Aops Wiki 2005 AIME I Problems/Problem 11

A semicircle with diameter

is contained in a square whose sides have length 8. Given the maximum value of 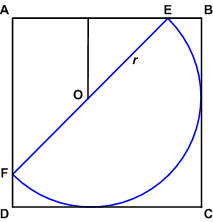 Now, let the square be

be the points at which the "corners" of the semicircle touch the square. Let

be the center of the semicircle.

We can just look at a quarter circle inscribed in a

right triangle. We can then extend a radius,

to one of the sides creating an

right triangle. This means that we have

. Then the diameter is

Define the radius of the semicircle as

triangle. The length of the perpendicular is

. The diameter is then

By the comments above,

Now, if we draw a line through the center,

, of the semicircle and its point of tangency with

, we see that this line is perpendicular to

and so parallel to

. Thus, by triangle similarity it cuts

in half, and so by symmetry the distance from

and so the distance from

. But this latter quantity is also the radius of the semicircle, so

Our two previous paragraphs give

(where we discard the negative root of that quadratic) and so