Bored of working on her computational linguistics thesis, Erin enters some three-digit integers into a spreadsheet, then manipulates the cells a bit until her spreadsheet calculates each of the following one hundred 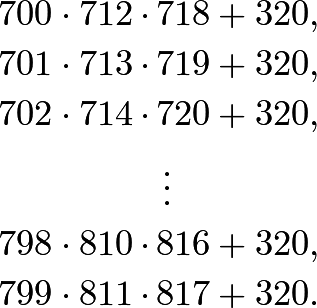 She notes that two of them have exactly

positive divisors each. Find the common prime divisor of those two integers.

Notice that each number can be written in form

is an integer from

. Expanding the polynomial results in

, and factoring that results in

If a number has eight positive divisors, then it’s prime factorization is in the form

are primes. The most likely option is three different prime numbers being multiplied together.

After finding the prime numbers from

(after finding one value, note that both share a factor to find the other value). Thus, the prime factorizations of the two numbers are

, so the common prime divisor of the two is