During a movie shoot, a stuntman jumps out of a plane and parachutes to safety within a

foot square field, which is entirely surrounded by a wooden fence. There is a flag pole in the middle of the square field. Assuming the stuntman is equally likely to land on any point in the field, the probability that he lands closer to the fence than to the flag pole can be written in simplest terms as

, where all four variables are positive integers,

is a multple of no perfect square greater than

, a is coprime with

. Find the value of 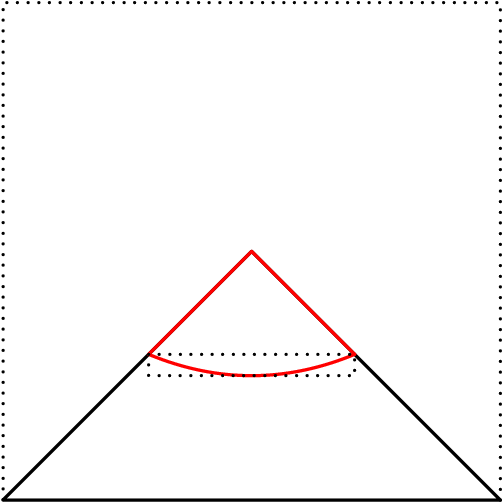 Using symmetry, the square can be divided into four look-alike parts. To find the probability of landing closer to the fence, subtract the outlined red area from the area of the larger triangle in the diagram.

. Since the distance from the vertex to the focus is

feet, the equation that models the parabola is

. Since one of the diagonals of the square can be modeled by the equation

, solving the system can find distances.

feet, the distance between the two points of intersection with a parabola and a line as seen in the diagram is

feet. Using similar triangles, the height of the smaller triangle is

The area of the smaller triangle is

square feet. That means the total unwanted area is

square feet. Because the total area of the large triangle is

square feet, the wanted area is

. Thus, the probability of the stuntman dropping at a point closer to the fence is