What is the minimum value of

If we graph each term separately, we will notice that all of the zeros occur at

is any integer from

The minimum value of

, since it is easy to see that the value will be increasing on either side. That means the minimum must happen at some

The sum of the slopes at

Now we want to minimize

. The zeros occur at

, which means the slope is

We can now verify that both

You can also think of the slopes playing 'tug of war', where the slope of each absolute function upon passing its

-intercept is negated, positively tugging on the remaining negative slopes.

The sum of the slopes is

So we need to find the least integer

. We can explicitly evaluate both to check that they are both equal to the desired minimum value of

Thus the minimum value of

Rewrite the given expression as follows:

Imagine the real line. For each

imagine that there are

boys standing at the coordinate

. We now need to place a donut on the real line in such a way that the sum of its distances from all the boys is minimal, and we need to compute this sum.

Note that there are

boys in total. Let's label them from 1 (the only boy placed at

(the last boy placed at

Clearly, the minimum sum is achieved if the donut's coordinate is the median of the boys' coordinates. To prove this, place the donut at the median coordinate. If you now move it in any direction by any amount

boys such that it moves

away from this boy. For each of the remaining boys, it moves at most

closer, hence the total sum of distances does not decrease.

Hence the optimal solution is to place the donut at the median coordinate. Or, more precisely, as

is even, we can place it anywhere on the segment formed by boy

: by extending the previous argument, anywhere on this segment the sum of distances is the same.

By trial and error, or by solving the quadratic equation

we get that boy number

is the last boy placed at

and the next boy is the one placed at

. Hence the given expression is minimized for any

Common part of both solutions

To find the minimum, we want to balance the expression so that it is neither top nor bottom heavy.

Now that we know that the sum of the first 84

's is equivalent to the sum of

to find the minimum.

are positive. Hence we get: 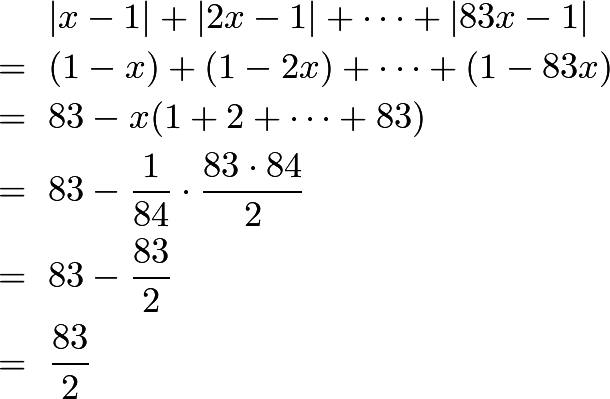 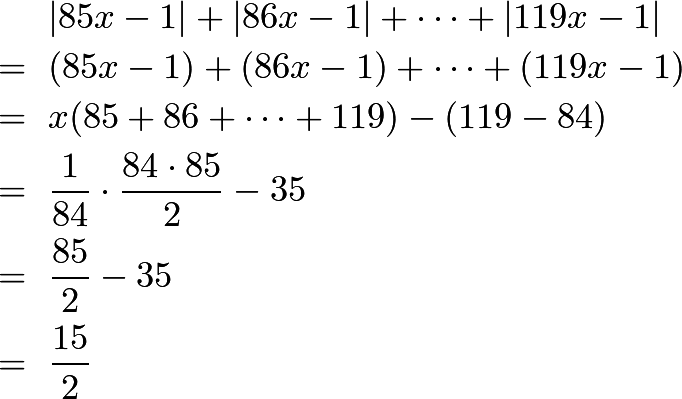 Hence the total sum of distances is

By the triangle inequality,

However, we may change signs of some of these terms to cancel out the

's. Since the minimum exists, we want all the

s to cancel out. Thus, we want to find some

. The answer(expression's value) is then