. The intersection of the domain of

is a union of

disjoint open intervals. What is

We note that since all of the

factors are inside a logarithm, the function is undefined where the inside of the logarithm is less than or equal to

First, let us find the number of zeros of the inside of the logarithm. 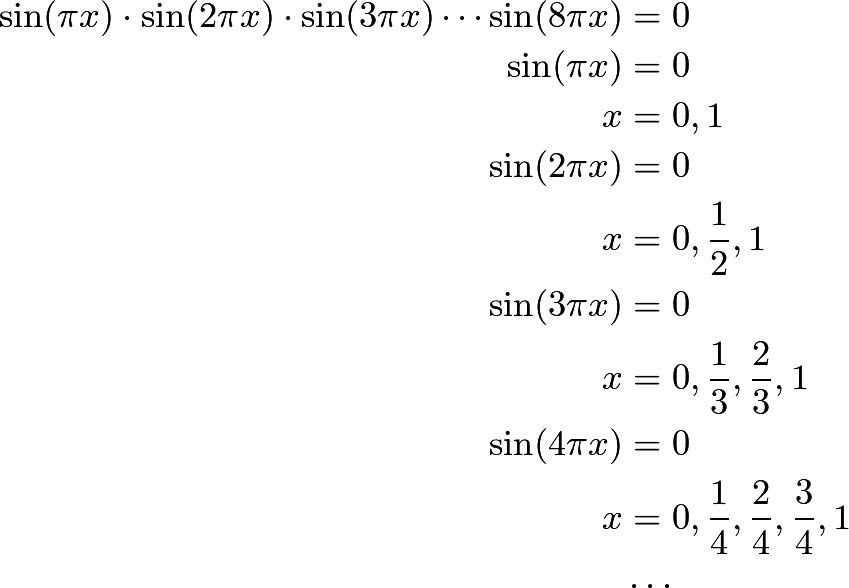 In order to find which intervals are negative, we must first realize that at every zero of each factor, the sign changes. We also have to be careful, as some zeros are doubled, or even tripled, quadrupled, etc.

is obviously positive. This means the next interval

is negative. Continuing the pattern and accounting for doubled roots (which do not flip sign), we realize that there are

. Since the function is symmetric, we know that there are also

And so, the total number of disjoint open intervals is

Note that the expression

must be greater than zero, since logarithm functions are undefined for

temporarily be the dependent variables of the functions

. It is easy to see that for

to be positive for

must be even for

for a given value of

is always positive on the range

) Since MAA allows rulers (and you should bring one to the actual exam), use it to your advantage and draw a larged scaled number line from

. (I recommend increments of at most

.) If you don't have a ruler but have graph paper, you can use that instead. Then, designate rows for

, respectively. Draw a large bar (label it with

so you know it's positive) for all values of

is even, and do that for all eight rows. Then, use your ruler (or another viable straightedge, such as the edge of another sheet of paper), place the straightedge perpendicular to the vertical line on your digram at

, and slowly work your way to

, marking all disjoint intervals in which your straightedge touches

You should be able to somewhat visualize what the

function looks like (if you can't then you should look it up and try to memorize it). To summarize, the graph of

is positive from the interval

and negative from the interval

(notice how the intervals use parentheses instead of brackets, as brackets would denote inclusive bounds and that it incorrect).

All of the various

functions that we are multiplying are in the form of

, which means the intervals have now changed to integer values.

Also, the period of the function

; For example the period of

Let a "wave" be a full period of a

curve. Then, a "half-wave" is half of a full period of a

curve. Over the interval

"half-waves". Also notice that the graph of

The problem asks for the number of disjoint intervals, not the values of the intervals themselves. This means we only want the positive values of

(the product of all of the various

are in the form

(this is in agreement with the fact that

Therefore, across the interval

, the sign will change every time the function hits a root of one of the

functions. We must be careful, however, as some roots (such as

Notice that the duplicates always come in pairs. For example,

; there are four equivalent roots. Across the interval

there are no duplicate roots that come in triplets, or in fives. The roots are always single, doubled up, or quadrupled up. So every time the function reaches a single root, it switches signs, and every time it reaches a duplicate root, the sign remains the same (this still counts as 2 distinct intervals, though, as the zeroes "separate" them). Listing out the roots (not including

Then in order (showing duplicates as well):

Then creating a sequence of signs based on the roots:

We see that there are