During AMC testing, the AoPS Wiki is in read-only mode. No edits can be made.
AoPS Wiki
Resources Aops Wiki 2017 AMC 10B Problems/Problem 18

In the figure below,

disks are to be painted blue,

are to be painted red, and

is to be painted green. Two paintings that can be obtained from one another by a rotation or a reflection of the entire figure are considered the same. How many different paintings are possible? 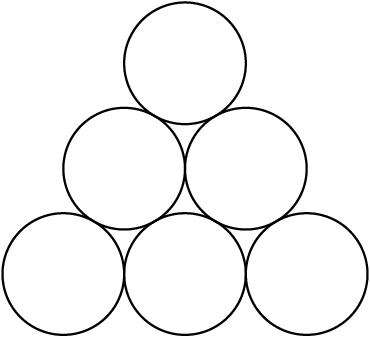 First we figure out the number of ways to put the

blue disks. Denote the spots to put the disks as

from left to right, top to bottom. The cases to put the blue disks are

. For each of those cases we can easily figure out the number of ways for each case, so the total amount is

discs as in the first solution. Ignoring reflections or rotations, there are

colorings. Now we need to count the number of fixed points under possible transformations:

1. The identity transformation. Since this doesn't change anything, there are

2. Reflect on a line of symmetry. There are

. Then, the colors of circles

must be the same, and the colors of circles

must be the same. This gives us

fixed points per line of reflection

counterclockwise or clockwise with respect to the center of the diagram. Take the clockwise case for example. There will be a fixed point in this case if the colors of circles

will be the same. Similarly, the colors of circles

will be the same. This is impossible, so this case gives us

By Burnside's Lemma, the total number of colorings is

Note that the green disk has two possibilities; in a corner or on the side. WLOG, we can arrange these as

Take the first case. Now, we must pick two of the five remaining circles to fill in the red. There are

of these. However, due to reflection we must divide this by two. But, in two of these cases, the reflection is itself, so we must subtract these out before dividing by 2, and add them back afterwards, giving

arrangement in this case.

Now, look at the second case. We again must pick two of the five remaining circles, and like in the first case, two of the reflections give the same arrangement. Thus, there are also

arrangements in this case.

In total, we have

We note that the group

acting on the possible colorings is

is a reflection. In particular, the possible actions are the identity, the

rotations, and the three reflections.

We will calculate the number of colorings that are fixed under each action. Every coloring is fixed under the identity, so we count

fixed colorings. Note that no colorings are fixed under the rotations, since then the outer three and inner three circle must be the same color, which is impossible in our situation.

colorings fixed under this reflection action. The other two actions are symmetric, so they also have

fixed colorings. Hence, by Burnside's lemma, the number of unique colorings up to reflections and rotations is