The Triangle Inequality says that the sum of the lengths of any two sides of a nondegenerate triangle is greater than the length of the third side. This inequality is particularly useful and shows up frequently on Intermediate level geometry problems. It also provides the basis for the definition of a metric space in analysis.

The Pythagorean Inequality is a generalization of the Pythagorean Theorem. The Theorem states that in a right triangle with sides of length

. The Inequality extends this to obtuse and acute triangles. The inequality says:

For an acute triangle with sides of length

. For an obtuse triangle with sides

This inequality is a direct result of the Law of Cosines, although it is also possible to prove without using trigonometry.

. This means that given a perimeter

for a plane figure, the circle has the largest area. Conversely, of all plane figures with area

, the circle has the least perimeter.

is a concave function from

. Therefore we may use Jensen's inequality:

Alternatively, we may use a method that can be called "perturbation". If we let all the angles

be equal, we prove that if we make one angle greater and the other one smaller, we will decrease the total value of the expression. To prove this, all we need to show is if

. This inequality reduces to

. Since this is always true for

, this inequality is true. Therefore, the maximum value of this expression is when

, which gives us the value

denote the circumradius and inradius of triangle

with equality if and only if the incenter equals the circumcenter, namely the triangle is equilateral.

Ptolemy's inequality states that for any quadrilateral

with equality when quadrilateral

First Proof: Let P be the point such that

. By SAS we also have that

. By the triangle inequality,

. calculating the lengths, we obtain an equivalent statement:

we get the desired result with equality when P is on DC. This happens when

By the triangle inequality, we have

on both sides we get the desired result with equality when

is collinear, implying either ABCD is cyclic or collinear.

The Erdős–Mordell inequality states that if

are the foot of the altitudes from

Proof: First, we prove a lemma. 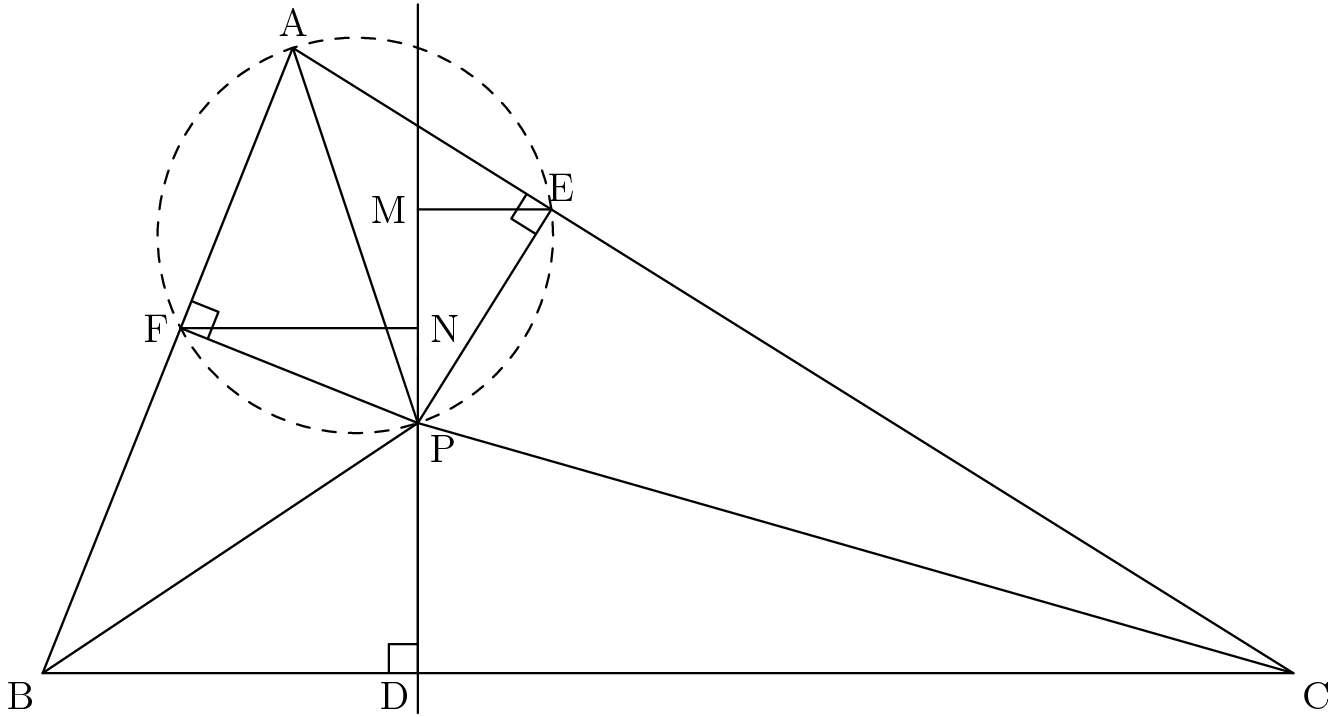 is cyclic, we have that

So the problem is reduced to proving that

but this is obvious by the Pythagorean Theorem.

Now the rest of the problem is straightforward. We know that

with equality when ABC is equilateral and P is the center of it.

Cagegory:Geometric Inequalities This article is a stub. Help us out by expanding it.