Odell and Kershaw run for

minutes on a circular track. Odell runs clockwise at

and uses the inner lane with a radius of

and uses the outer lane with a radius of

meters, starting on the same radial line as Odell. How many times after the start do they pass each other? 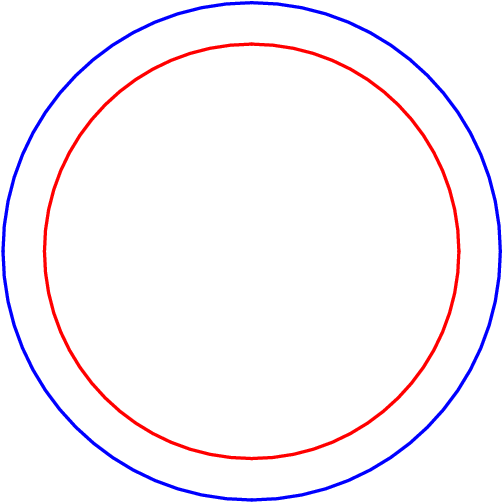 , we note that Odell runs one lap in

minutes, while Kershaw also runs one lap in

minutes. They take the same amount of time to run a lap, and since they are running in opposite directions they will meet exactly twice per lap (once at the starting point, the other at the half-way point). Thus, there are

laps run by both, or

We first find the amount of minutes,

, until Odell and Kershaw's next meeting. Let

be the angle in radians between their starting point and the point where they first meet, measured counterclockwise.

Since Kershaw has traveled

meters at this point and the circumference of his track is

since Odell has traveled

in the second equation, we get

. Then, from the first equation, we have

minutes, they are back at the same position, except rotated, so they will meet again in

minutes. So the total amount of meetings is