During the van ride from the Grand Canyon to the beach, Michael asks his dad about the costs of renewable energy resources. "How much more does it really cost for a family like ours to switch entirely to renewable energy?"

Jerry explains, "Part of that depends on where the family lives. In the Western states, solar energy pays off more than it does where we live in the Southeast. But as technology gets better, costs of producing more photovoltaic power go down, so in just a few years more people will have reasonably inexpensive options for switching to cleaner power sources. Even now most families could switch to biomass for between

per year. The energy comes from sawdust, switch-grass, and even landfill gas. We pay that premium ourselves, but some families operate on a tighter budget, or don't understand the alternatives yet."

Wanting to save her own energy, Alexis decides to take a nap. She falls asleep and dreams of walking around a

coordinate grid, looking for a wormhole that she believes will transport her to the beach (bypassing the time spent in the family van). In her dream, Alexis finds herself holding a device that she recognizes as a

from one of the old

TV series. The tricorder has a button labeled "wormhole" and when Alexis presses the button, a computerized voice from the tricorder announces, "You are at the origin. Distance to the wormhole is 2400 units. Your wormhole distance allotment is

Unsure as to how to reach, Alexis begins walking forward. As she walks, the tricorder displays at all times her distance from her starting point at the origin. When Alexis is

units from the origin, she again presses the "wormhole" button. The same computerized voice as before begins, "Distance to the origin is

units. Distance to the wormhole is

units. Your wormhole distance allotment is

Alexis begins to feel disoriented. She wonders what is means that her

, and why that number didn't change as she pushed the button. She puts her hat down to mark her position, then wanders around a bit. The tricorder shows her two readings as she walks. The first she recognizes as her distance to the origin. The second reading clearly indicates her distance from the point where her hat lies - where she last pressed the button that gave her distance to the wormhole.

Alexis picks up her hat and begins walking around. Eventually Alexis finds herself at a spot

units from the origin and

units from where she last pressed the button. Feeling hopeful, Alexis presses the tricorder's wormhole button again. Nothing happens. She presses it again, and again nothing happens. "Oh," she thinks, "my wormhole allotment was

Despair fills poor Alexis who isn't sure what a wormhole looks like or how she's supposed to find it. Then she takes matters into her own hands. Alexis sits down and scribbles some notes and realizes where the wormhole must be. Alexis gets up and runs straight from her "third position" to the wormhole. As she gets closer, she sees the wormhole, which looks oddly like a huge scoop of ice cream. Alexis runs into the wormhole, then wakes up.

How many units did Alexis run from her third position to the wormhole? 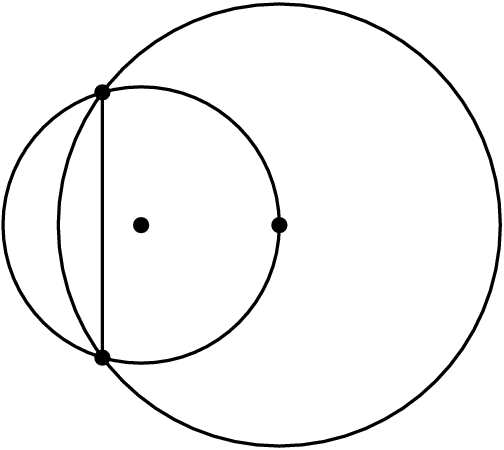 Let the origin be the starting point of Alexis. The wormhole is

units from the starting point, so the wormhole is on the circle represented by the equation

units from there, so the wormhole is also on the circle represented by the equation

and substituting results in

back in results in

units from the third position to the wormhole.

Note: Problem starts at ``Wanting to save energy".

be the position Alexis started at,

be the position of the wormhole,

her second position. Draw a circle around

on the circle, and draw triangles

be the altitude of

are congruent via HL Congruence, so

, which requires the cosine. Since

be the altitude of

are congruent via HL Congruence, and

is obtuse. This means