Looking for a little time alone, Michael takes a jog along the beach. The crashing of waves reminds him of the hydroelectric plant his father helped maintain before the family moved to Jupiter Falls. Michael was in elementary school at the time. He thinks for a moment about how much his life has changed in just a few years. Michael looks forward to ﬁnishing high school, but isn’t sure what he wants to do next. He thinks about whether he wants to study engineering in college, like both his parents did, or pursue an education in business. His aunt Jessica studied business and appraises budding technology companies for a venture capital firm. Other possibilities also tug a little at Michael for diﬀerent reasons.

Michael stops and watches a group of girls who seem to be around Tony’s age play a game around an ellipse drawn in the sand. There are two softball bats stuck in the sand. Michael recognizes these as the foci of the ellipse. The bats are

feet apart. Five other children stand on diﬀerent points on the ellipse. One of them blows a whistle and all seven children run screaming toward one bat or the other. Each child runs as fast as she can, touching one bat, then the next, and ﬁnally returning to the spot on which she started. When the ﬁrst girl gets back to her place, she declares, “I win this time! I win!” Another of the girls pats her on the back, and the winning girl speaks again, “This time I found the place where I’d have to run the shortest distance.” Michael thinks for a moment, draws some notes in the sand, then compute the shortest possible distance one of the girls could run from her starting point on the ellipse, to one of the bats, to the other bat, then back to her starting point. He smiles for a moment, then keeps jogging. If Michael’s work is correct, what distance did he compute as the shortest possible distance one of the girls could run during the game? 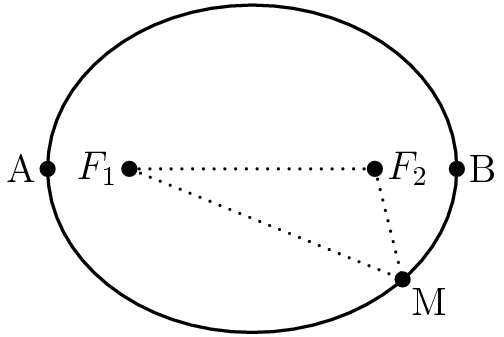 be a point on the ellipse,

be the two foci of the ellipse, and

be two points on line

that are also on the ellipse. From the given information,

If a girl starts on point

the total distance she has to run (in feet) is

is on the ellipse,