With about six hours left on the van ride home from vacation, Wendy looks for something to do. She starts working on a project for the math team.

There are sixteen students, including Wendy, who are about to be sophomores on the math team. Elected as a math team officer, one of Wendy's jobs is to schedule groups of the sophomores to tutor geometry students after school on Tuesdays. The way things have been done in the past, the same number of sophomores tutor every week, but the same group of students never works together. Wendy notices that there are even numbers of groups she could select whether she chooses

students at a time to tutor geometry each week:

Playing around a bit more, Wendy realizes that unless she chooses all or none of the students on the math team to tutor each week that the number of possible combinations of the sophomore math teamers is always even. This gives \her an idea for a problem for the

Wendy works the solution out correctly. What is her answer? 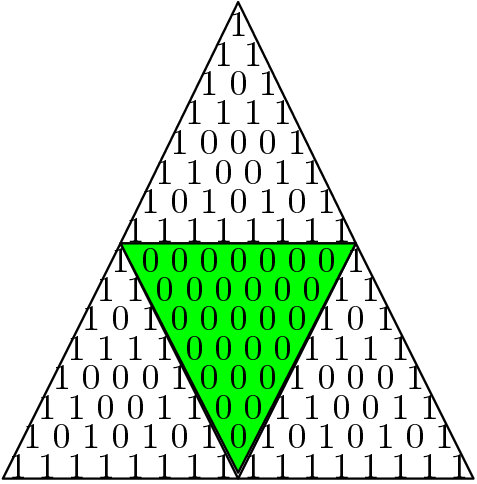 Every Pascal's triangle of size

can be decomposed into

which include the all-zero "inner" triangle with vertices

and the three identical "outer" triangles with vertices

as shown in the previous diagram (starting at row 0):

be the number of EVEN numbers in the

. Then we have the following recursive relation

zeros associated with the "inner" triangle.

is the maximum power of 2 that divides a, then

is also the maximum power of 2 that divides

row of the Pascal triangle. Let

be the number of ODD numbers in the

then we have the following recursive relation

along with an "inner" triangle of evens which does not contribute to the sum.